Save a horse, ride gay Country nights in Atlanta 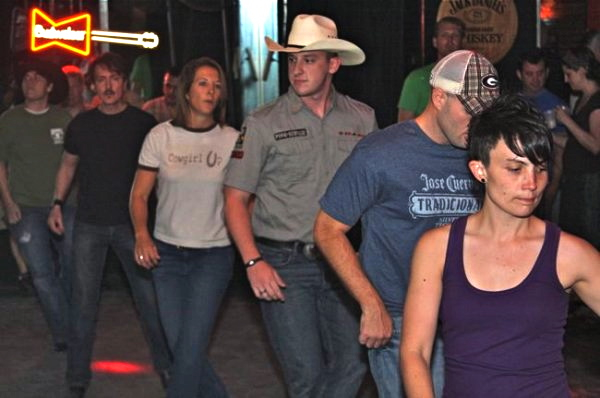 In the recent resurgence of two-step and line dance nights at Atlanta’s gay bars, there are the Luke Bryan people that are all, “I Don’t Want This Night to End,” and then there’s the rest of us, just standing idly by with Eric Church’s “Drink in My Hand.” I’m in the latter group.

I admit it. After years of failed attempts to get off the sidelines and smack in the middle of the obvious fun people are having as they step lively to new hits and Country classics, I’ve resigned myself to the fact that I got no moves for a hoedown.

If you’re not a Country Music fan at all, you don’t know what I’m talking about and don’t care. I get that. But I also bet there are plenty of thumpa-thumpa dancing queens who love a hot cowboy as well as others who would welcome a little variety on their playlists and in their nightlife – if they only knew the first thing about how to get in on one of the several new and newish Country-themed gay and lesbian bar nights.

Besides not wanting to look incompetent, I’m convinced that I’m cursed: I’m originally from Texas and can’t Texas Two Step. I’m a son of the South and I can’t even wrap my head around the Cotton Eyed Joe, much less the Electric Slide.

And it’s not for lack of trying. Classes and many a patient individual have tried to break through my mental barrier. Like I’ve told many an ex, it’s not them, it’s me. Except in this case, I mean it.

That doesn’t mean I don’t enjoy gay Atlanta’s Country comeback of late. The return of 3 Legged Cowboy, for at least one night a week, hosted at the Heretic started something of a trend that’s picked up speed. Heretic’s 3-Legged Thursdays — and some Saturdays — are a hit. Then came LeBuzz’s Wednesday Country Nights, and starting this Friday, My Sister’s Room throws down Round ‘Em Up Fridays.

For those without my apparent mental block, lessons are available in the first hour of both the Heretic and My Sister’s Room events. If you’re interested in opening your mind to the music or just dressing up in the gear but haven’t tried it yet, don’t worry: Watching is its own fun. Come say hi; I’ll be the guy tapping his toe and nursing a beer.