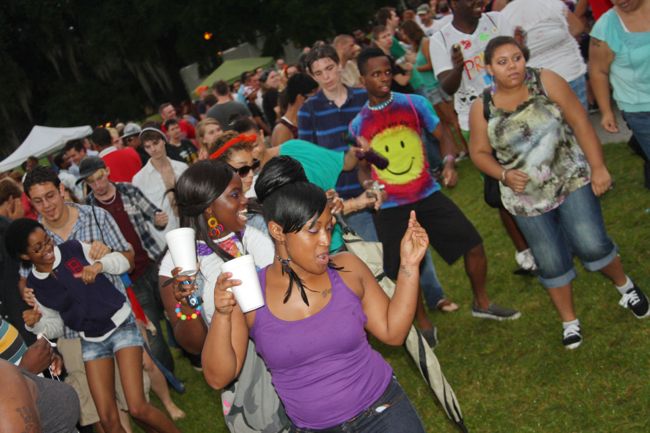 Wet but still proud, a steady crowd of people enjoyed the 13th Annual Savannah Pride Festival on Saturday despite an even steadier stream of late-afternoon storms that drenched the outdoor festival.

The day-long event in Forsyth Park, the city’s largest and most prominent public space, featured vendor booths, entertainers including pop singer JoJo and Atlanta’s Sexual Side Effects, and the first-ever address from Savannah’s mayor. Even as the storms chased away some Pride-goers, the music continued and so did the performers.

Mayor Edna Jackson opened the festival, the first sitting mayor to launch Savannah Pride. Jackson stumped for LGBT voters during the event last year (view photos) and was among a host of political candidates at that event.

Organizers said the event proved to be “an amazing day.”

Thank you to everyone who came out to pride. It was truly an amazing day and we are so grateful and proud to live in a city where so many people come together for an wonderful cause!!!!

A portion of the park was cordoned off for Saturday’s event, which charged a $5 to $7 admission. Organizers added a festival cover charge in 2011. Pride hoped to attract 10,000 people – double last year’s attendance – though it wasn’t clear how the weather impacted final attendance numbers.

The rain, though, didn’t dampen the spirits of Pride attendees or vendors.

Was happy to feed everyone had such a great time see y’all next year at the hotdog stand. Thank you to all those who visited us hope you enjoyed the food. We always enjoy serving it. Can’t ait till next year