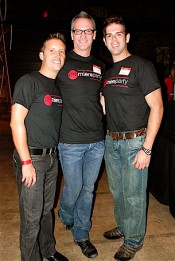 Plans for CHRIS Kids’ annual Premiere Party soiree on Saturday are set, and the final touches are being placed on this year’s “White Party” theme for what organizers say is truly a family affair to benefit homeless youth.

“It’s always inspiring when Premiere Party comes around, because it’s just such an outpouring,” says Beth Keller, director of development for CHRIS Kids. “Everything from parking the cars to the flowers to signage to the glassware to the food and the volunteers [top photo], every component has LGBT community and business involvement.”

And the final ingredient is you, Keller says.

“We say it’s a family, because not any one person can come put this thing on,” she says. “I get goose bumps because we all come together like a patchwork for these kids who literally don’t have a family. Everyone who comes to Premiere Party is part of these kids’ family.”

You get it. Good times for a good cause. This year, the fun not only includes your festive white attire—bounces the light around and makes us all look good, queen—but also brings back the beats of popular gay Atlanta DJ Chris Griswold (second photo), hobnobbing with hundreds of friends, and an open Grey Goose bar to grease your bidding wheels at a fabulous silent auction (third photo).

Many people can’t get the name CHRIS Rainbow Program, or the even older Rainbow House, out of their head. CHRIS Kids is staying ahead of the curve, Keller says.

“In terms of LGBT youth, CHRIS Kids has been helping LGBT youth since its inception 30 years ago,” she says. “One of the neat things about our programs is that they evolve with the times. Kids are coming out earlier, and sometimes being LGBT is just one issue they face. So CHRIS Kids works best when we can address several of their challenges through different programs.”

The former Rainbow Program was renamed by the homeless LGBT youth themselves.

“They didn’t like being labeled, and so when we expanded the beds – almost tripled its capacity—they wanted to change the name. They actually voted and it became TransitionZ. It’s really a perfect name, because at that age, that’s what they’re doing, whether they are aging out of foster care, moving on with school or into the workforce, they’re transitioning.”

The newly expanded TransitionZ homes are called Summit Trail, and they still serve LGBT youth among others who need the help. The youth like saying they live at Summit Trail rather than telling random people at school or work that they live in a home or in a program.

The youth in another CHRIS Kids program, the group home, jumped on the name-changing bandwagon, too. That home is now called JourneyZ, and it serves LGBT youth as well.

“That’s why we get so excited, even in the nitty gritty of putting on the event, because of the kids,” Keller says. “We all do it for the mission, and it’s so rewarding.”

You may feel so rewarded that you have to keep the party going. The official Premiere Party afterparty takes place with party promoter Chris Coleman and the gang at Las Margaritas immediately following the main event.

Find out about all of the inclusive CHRIS Kids programs at chriskids.org. The Premiere Party takes place June 12 at Mason Murer Gallery. Buy tickets and get more details, including full menus and auction items at the Premiere Party website.