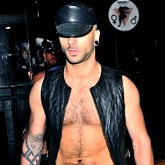 The fun for the Panther L/L group will already be underway as of Friday. The group kicks off its weekend-long 22nd anniversary of leather and Levi goodness with a bar night at the Eagle. Panther partying continues Saturday with an evening cookout and the group’s From Swan to Swine, also at the Eagle.

That’s when Chandler Bearden, Mr. Atlanta Eagle 2010, steps into the Eagle’s Saturday night action. He won the title last month (photos) and is looking to represent Atlanta well at the International Mr. Leather contest in Chicago over Memorial Day Weekend.

“I’m really looking forward to going to Chicago,” Bearden says. “It’s going to be an amazing experience getting to know people from all over the world in our community and making those contacts.”

But he can’t do it alone. IML contestants are responsible for their expenses, from airfare and hotel accommodations to the gear necessary to compete.

“It’s an overall pretty expensive trip,” Bearden says. “Portions of the competition require certain attire. You want to look your best at each stage.”

That includes gear for categories like Pecs and Stage Presence (physique, jockstrap), Formal Attire (full leather), judges interviews, a speech in front of 2,000 people, and the all important first-impression at the Opening Ceremonies.

Immediately following the Panther gig, Bearden raffles off some big treasure at his Mr. Atlanta Eagle IML Fundraiser on Saturday to help raise the necessary funds. And not only do you get to adore Mr. Atlanta Eagle, you get a chance at the booty, er, the prizes. Raffle items include gifts from local gay retailers and some high-value goodies like cigar and paraphernalia baskets, registrations to Southeast Leatherfest, body piercing gift certificates and much more.

But why would you stop a Saturday that’s getting so good? Ya wouldn’t, Sally.

Bear Saturday at the Heretic is a pre-party for the Premiere Party for CHRIS Kids on June 12. But rather than just invite all the bears, Heretic is hosting the bear-legendary DJ Blaine (bottom photo).

Blaine is a veteran of parties across the U.S., including Provincetown Bear Week, Woof Club LA and many more. He is known for exciting industrial beats and for going shirtless to stir his crowds into a frenzy.

So what’s an enthusiast to do? Suit up, brother. Your plans are set for Saturday.