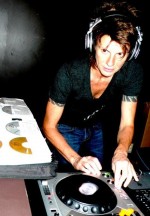 A month has already gone by since Vicki Powell’s first FLUXdeluxe two-day party and Jay McCracken’s Bear Saturday rocked the Heretic. But the time has come again for special events that bring on the beats, boys and beverages.

You know all about DJ Vicki Powell and her legendary FLUX parties from our recent interview. And we also told you all about the ingenious FLUXdeluxe concept before its May 7 debut, and by all accounts, the Powell (top photo) and Bill Kaelin overnighter was a hit—big time. More than 250 people have already RSVP’d “yes” to this month’s Facebook invite.

At Powell’s FLUX parties, “anything goes—there are no rules, no format. We just get into it,” Powell says. “I would say my music is pretty eclectic. I don’t take it too dark; I like to keep it somewhere between deep and sexy, and dirty and rebellious,” she says.

If you were under a rock in May, a reminder: The FLUXdeluxe stay-cation party gets started on Saturday night at the Livingston inside the Georgian Terrace Hotel. Book a discounted room, homey, because that’s just the beginning. When you wake up Sunday morning, the FLUX pool party begins. Cocktails—and cocks and tails—ensue.

FLUXdeluxe is scheduled for the first weekend of each month this summer. For June, the party celebrates you and your fabulosity as well as Kaelin’s birthday. The longtime gay Atlanta nightlife guru turns 40 on Sunday. Special note: There is no cover charge and you don’t have to book a room to go to the FLUX parties. Hey! 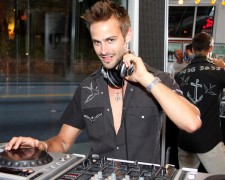 Also on Saturday’s DJ front, DJay McCracken (second photo) brings his brand of sinister back to the dance floor at Heretic. With a monthly gig renamed “Bear Saturday,” he puts the race in your pulse and the hair in hirsute for the big boys and hotties with his signature brand of beats.

It gives a whole new meaning to the phrase “Dancing Bear,” doesn’t it?

As the reigning gay man on Creative Loafing’s Lust List this year and a model veteran of our daily Morning Fix feature, McCracken is no stranger to turning up the heat and stirring up the trouble.

So if you’ve gotta move your feet to make the weekend right, Powell, McCracken, NYC’s DJ Sir Loins at Mary’s and Saturday’s whole Gay Agenda of LGBT events, should keep you plenty busy.