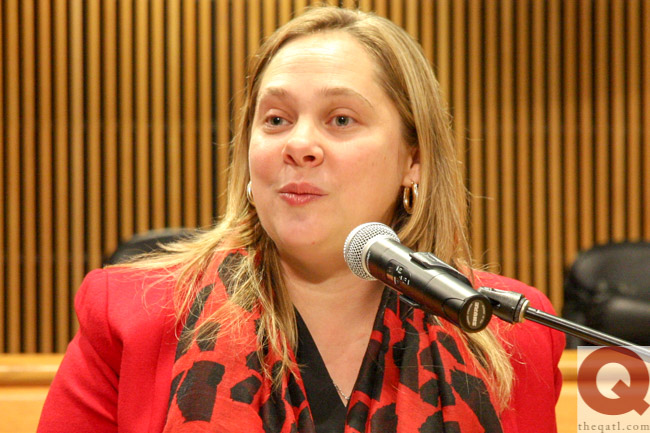 But Amico will have to get through two other candidates in the Democratic primary for the 2020 seat first. She announced her candidacy for the race in August.

It’s now one of two open two U.S. Senate seats in Georgia that will be on the ballot in 2020 following Sen. Johnny Isakson’s retirement at the end of the year. That could increase the chances of Democrats flipping control of the Senate.

Amico, who lost to Geoff Duncan in a 2018 run for lieutenant governor, criticized the Trump administration for filing briefs with the U.S. Supreme Court arguing that LGBTQ workers are not protected by federal civil rights law.

“You’ve got the president trying to convince the courts that they can discriminate against people for who they are, for how God made them,” Amico said. “It’s anathema to the values of this country. It’s wrong.”

The U.S. Supreme Court will hear oral arguments on the issue in October. One of the cases involves a Clayton County man who was fired for being gay.

Amico supports the Equality Act “without question.” The measure, which would add sexual orientation and gender identity as protected classes to the Civil Rights Act of 1964, passed in the U.S. House in May but faces a tough fight in the Senate.

Amico wants to build on the work she did in the race for lieutenant governor.

“We came so close, we brought so many new people to the polls. We increased turnout in meaningful ways with hundreds of thousands of people. I think people felt hopeful they had someone to vote for instead of voting against,” she said. “For me the work that we did last year is not finished and it would seem very illogical to walk away before we finished what we started.”

But Amico entered the U.S. Senate race just weeks after the car-hauling company she led filed for bankruptcy. She said the bankruptcy agreement saved the jobs and health benefits of 3,000 employees at Jack Cooper Ventures.

“We were pushed to the brink of extinction by this trade war that President Trump pursued and David Perdue supported,” Amico said. “The trade war is what happens when you devastate the union movement.”

Amico plans on marching in the Atlanta Pride parade on Oct. 13.

“My kids are very excited,” she said. “They’ve already picked out their outfits for this year. We still have the Pride flag in their playroom that they carried [last year].”

“I think now more than ever it’s really important for us to show up as allies. It always is, but in this moment, the only way for people to remember there are more of us who still believe in right and wrong, who still believe that people should be able to live who they are and love who they love, is for us to show up frequently and consistently and stand shoulder to shoulder saying we’re tired of this rhetoric,” she added.

Former Columbus Mayor Teresa Tomlinson and Clarkston Mayor Ted Terry are also in the Democratic primary for the chance to face Perdue in November 2020.