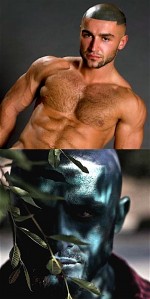 But this story just gets weirder.

FashionIndie has some shots from the set that include Santino and out rapper Deadlee, and Fangoria posted several more behind-the-scenes photos.

One comment on Fangoria says the photos are “strangely arousing and repulsive.” We’ll go with the latter. Click the links if you dare; just don’t say we didn’t warn you.

But weird is not new for LaBruce, or the video’s star, Titan Man Francois Sagat (middle photos, before and after Zombie makeup). 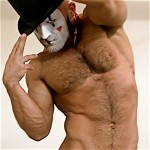 And that’s just the tame stuff. A makeshift music video of him and another man teasing us with clown porn-in-the-making to the tune of “Disco Stick” is also available if you just can’t help yourself.

Hey, don’t blame us. We simply couldn’t make this stuff up.