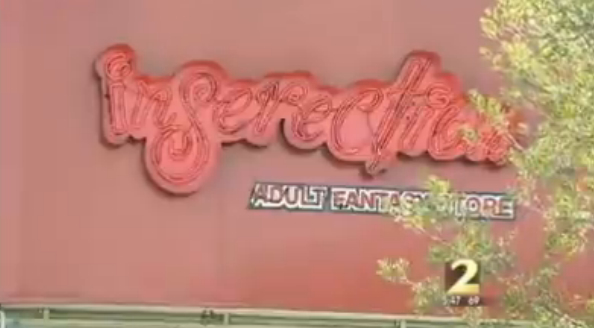 How many men seeking men for quickie blow jobs does it take to fill up a video booth in a Sandy Springs jack shack? If it’s more than one, this Fulton city objects. The video booths at Inserection on Roswell Road – the same “adult fantasy store” with locations across metro Atlanta, including its flagship store on Cheshire Bridge Road – are apparently so popular, city officials took notes. Yes, they sent investigators to document what they say are violations of city code, chiefly more than one guy in a booth at a time having – shocker! – sex. To wit, the city filed a lawsuit Tuesday in Fulton County Superior Court against Inserection alleging that it’s a habitual violator of its vice ordinances. They asked a judge to force the jack shack to play by the rules or be shut down. To be fair, Sandy Springs doesn’t care for titty clubs, either. They sued four of those as well.

Just how did they document the repetitive thumping, groaning and moaning coming from the video booths? And did they use one of those little clicker things that the door guys at Blake’s and Burkhart’s do to count guys as they filed into the booths? At least they aren't arresting all of the quickie-seeking guys they are documenting. With those crowded booths at Inserection, city officials should be fast-tracking permits to add square footage. It’s a recession, after all, and here’s an enterprise seeing throbbing business. A rise in interest, so to speak.