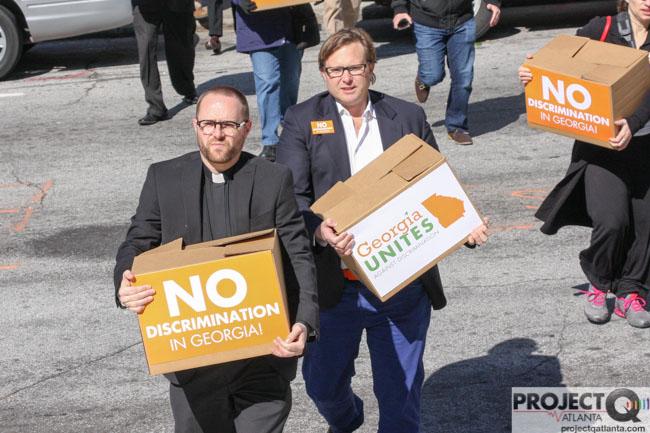 The tech firm Salesforce, whose saber rattling over an anti-gay bill in Georgia helped draw the interest of firms across the country, formalized its opposition in a letter to lawmakers on Wednesday.

Last year, CEO Marc Benioff and the San Francisco-based company helped fight anti-gay legislation in Indiana last year. Last week, he took two shots at Georgia's House Bill 757, first comparing it to legislation in Indiana that caused a national backlash and then threatening to pull back on the company's sizable investments in Atlanta if the measure becomes law.

On Wednesday – as LGBT groups delivered 75,000 emails opposing the legislation to Gov. Nathan Deal (photo) – Salesforce formalized its opposition in a letter to state lawmakers. Warren Wick, a senior vice president in Salesforce's Atlanta operations, said the legislation would interfere with the company's ability to attract a highly-trained and diverse pool of employees.

“Without an open business environment that welcomes all residents and visitors, Salesforce will be unable to continue building on its tradition of innovation in Georgia,” Wick wrote. “We encourage you to take decisive action to avoid this kind of damage and reaffirm that our state will not tolerate discrimination against people because of who they are or who they love.”

Salesforce also swatted back at Sen. Josh McKoon, a sponsor of another anti-gay “religious freedom” bill. McKoon took to the floor of the Senate on Friday to criticize Benioff's comments as “political antics.”

“Salesforce does business in Singapore and India. What is important to note about the laws of India and Singapore is that they make homosexuality a crime punishable by imprisonment,” McKoon said.

“While this gentleman seems to think there's a problem with providing modest protections for the religious liberty of 10 million Georgians, he has absolutely no problem doing business and making money in countries where being homosexual is a crime,” McKoon added.

The company told the AJC that its Atlanta employees asked it to get involved in the debate of House Bill 757.

This discussion is about Georgia, where our local employees have asked us to get involved. We are not alone—more than 400 businesses have joined Georgia Prospers to oppose this bill in its current form. We were encouraged by comments from Governor Deal indicating that the bill is not in its final form. Salesforce believes in equality for all. Equal rights is an important issue, both in the U.S. and around the world, and we do whatever we can to protect our employees and customers from discrimination.”

The legislation would allow faith-based organizations to discriminate against LGBT people and others based on religious beliefs. International businesses including Salesforce, Twitter, Virgin, Dell, Microsoft, Unilever, InterContinental Hotels Group and Porsche have come out against the legislation. Opposition has also come from several trade groups and others including the Metro Atlanta Chamber, Atlanta Hawks, the Georgia NAACP and the Atlanta Business Chronicle. And local faith leaders and businesses are also speaking out, including HJ Russell and Cooke's Warehouse.

The full letter from Salesforce:

Salesforce is proud to be part of Georgia’s strong economy. This is a state that has been recognized as having the nation’s top business climate. Over the past nine years, we’ve had the opportunity to make substantial investments in Georgia, increasing our employee base and growing Salesforce Pardot into one of the world’s fastest growing B2B marketing automation apps. In fact, our Atlanta office is now one of our top 5 employee hubs in the U.S.

As one of Georgia’s fastest growing technology employers, Salesforce believes that HB 757 in its current form creates an environment of discrimination that is inconsistent with our values and I am writing to register our opposition to this bill. Equality is a core value at Salesforce and ensuring that our employees feel welcome, valued, and safe is a top priority.

Salesforce has been recognized as one of Atlanta’s top places to work. Our success is fundamentally based on our ability to attract and retain the best and most diverse pool of highly skilled employees, regardless of race, sex, color, national origin, ethnicity, religion, age, disability, sexual orientation, gender identity, marital status, or any other classification protected by applicable laws.

We are proud to be a part of Georgia Prospers ­ a coalition of more than 400 businesses across Georgia who are committed to promoting a welcoming and inclusive state. We support the efforts of the Metro Atlanta Chamber and other major employers in the state who are working to protect all Georgians against discrimination.

Without an open business environment that welcomes all residents and visitors, Salesforce will be unable to continue building on its tradition of innovation in Georgia. We encourage you to take decisive action to avoid this kind of damage and reaffirm that our state will not tolerate discrimination against people because of who they are or who they love.