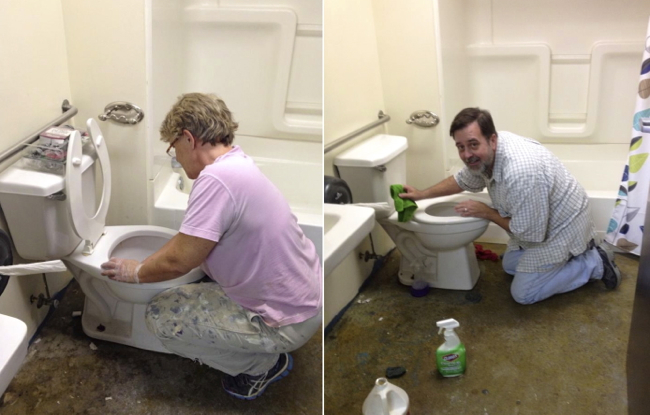 A gay executive director’s work is never done. Georgia Equality’s Jeff Graham and Health Initiative’s Linda Ellis rolled up their sleeves to see an expansion of Atlanta’s LGBT community hub through to completion.

The same rights advocates who shepherded the Rush Center into existence and then into its own were up to their elbows in even potty water leading up to Saturday’s Rush Center Grand Re-opening. The event celebrates and unveils the posh new space where GE, the Health Initiative, Atlanta Pride and other gay Atlanta organizations work, meet and socialize. The center is named for the late Atlanta gay activist Phillip Rush, who died in 2009.

The renovations took six months to complete. During that time, the two directors poked fun at their “jack of all trades” jobs on Facebook to show they’ll dive to any depths for the center and for your gay rights in Georgia.

They had fun with it. Graham posted Ellis’ photo (above, left) with a bon mot, prompting one friend of the center to call for “the ‘Donate Now’ button.” Ellis commented on Graham’s post, then responded in kind with his photo (right), to which he likewise replied.

“The glamorous life of an executive director — with Linda Ellis at Phillip Rush Center.”

Linda Ellis: I'm cleaning it so that Jeff Graham won't get his hands dirty when he fixes it. At least we share the load around here.

“He's impressive – and the toilet works! — with Jeff Graham.”

Jeff Graham: For those of you who've seen both photos, you'll notice that the toilet repair kit is no longer on top of the tank. Windows, tiling AND toilet repair. Honing my skills in case the whole executive director thing doesn't work out

The, um, fruit of their labor is ready for its closeup. We assume they’ll be upright and cleaned up nice at the grand re-opening on Saturday. Congratulating – and thanking – them is just one of the best gay things to do in Atlanta this weekend. Just RSVP to attend.