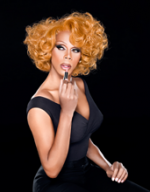 As if Stonewall Week in June isn’t shaping up to be fabulous enough, word has leaked out that legendary drag performer RuPaul is returning to Atlanta for a fundraiser on June 25.

The event at Primal, with tickets at $20, is being billed as a fundraiser for the Atlanta Cotillion that benefits AID Atlanta. Doors open at 9 p.m.

We offer the details with this caveat: We’re still working to confirm the appearance, as the details are nowhere to found on the websites of Primal, Atlanta Cotillion, AID Atlanta or even RuPaul herself.

The appearance brings to 19 the number of events set for Stonewall Week — it’s really more than seven days of events — in late June. It’s turning into a mini-Pride to hold us over until late October, when the Atlanta Pride Festival holds its annual event. That shifted to fall so it could return to Piedmont Park.

There’s plenty to do during Stonewall Week, from parties to panel discussions, a transgender rights march and benefits. All the events are included in the new, interactive community calendar from Project Q Atlanta.