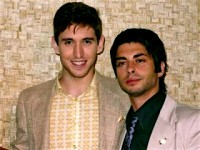 Way more interesting than Thursday’s final challenge to see who goes to Bryant Park on this season of “Project Runway” is the continuing romance of Wesley Nault and Daniel Feld (photo) from last season.

Cutie Wesley—who was “aufed” early in Season 5 for creating a hideous shiny brown bag of a dress—didn’t stand a chance at the crown, but he won Daniel’s heart instead. Awwww. The pair are now living and working together on collaborative designs under the name WesFeld. Double awwww.

Accusations abound that “Runway” homophobically cut footage of the pair holding hands and whispering during last season’s runway segments, as well as flirting in the workroom. Triple awwww.

The guys say they were trying to keep the relationship under wraps themselves. As if they have anything to say about what footage got cut. It’s reality TV, for god’s sake. The show’s ultimate Gay Gentleman Tim Gunn says the show was trying to be discreet. Yeah, like when they gave us the excruciatingly extended close-up of Jack Mackenroth’s swollen staph-infection meltdown as they revealed his HIV status in Season 4.

But whether the show is hiding gay love or not, that was Bravo. If you’ve held on this long during the show’s abysmal first season on Lifetime, you know that it has its own potential issues for gay viewers, which we’ve speculated has to do with its “Television For Women” tagline. This season does show the blatant heterosexual attraction between Straight Logan and Carol Hannah, which is fine, just not very interesting.

We had early hopes that the show’s gay magic would continue with six gay male contestants. Week by week, they’ve been picked off. Sure, they deserved it; this season’s designs are not only watered down for the masses, but we say the designers themselves are stacked to ensure a female winner. They even finally kicked off the hottest male contestant, Straight Logan, last week. That leaves only Bumpkin Christopher and his questionable taste to vie in Thursday’s final challenge.

In the episode, such-a-has-been Cindy Crawford is the guest judge (bottom photo). And we all know she’s a bastion of good decision making and high style (reference her name on lines at K-Mart, QVC and Rooms to Go for the proof). She’s so smart and classy. Well… she’s so pretty. Um… she’s so tall.

Predictions? Sure, we’ll make some, though saying we really care would be an outright lie.

• Top Two Althea and heir-apparent Irina mud wrestle for the whole kit and kaboodle in the Nov. 13 finale. At least that would be interesting.
• Gordana goes home Thursday so there can be at least one inferior male for the better designers to tromp in Bryant Park.
• A close second for Thursday: Christopher crashes and burns so that the Bryant Park Four can empower Lifetime’s middle-America female viewership. They’re the only ones still watching anyway, right?

Post-show update: In a slight twist, Gordana and Christopher were both “auf” on Thursday. With a touch of dignity, both showed dresses that were among their best work in the final challenge. Irina, Althea and Carol Hannah are off to New York Fashion week on the Nov. 12 episode. Girl power!

In other news, Bravo will try again to get some of its mojo back. After the embarrassing defeat of Isaac Mizrahi’s half-season “Runway” knock-off “The Fashion Show,” they will try again with “Launch My Line,” starring high-fag twins DSquared2 (aka Dean and Dan Caten). Stay tuned.