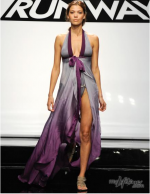 The designers are under enough pressure with a Michael Kors-led challenge to create a resort look, but this week’s “Project Runway” twist sends them reeling. They must turn over their design to another contestant to execute.

The random competitor pairings inititally creates the desired tension. While it’s true that fashion designers rarely sew their own work, they do usually get to choose who sews it. Manic Mondo is pissed when he gets Michael C., and OCD Ivy goes all control freak on her partner Michael D.

Neither of those would make us nervous, actually. Who the hell would want to work with Gretchen? Not only is she a bitch to sew for and work with, but we wouldn’t trust our look to her back-stabbing ways. The Gretchen spoils go to Ditzy Casanova, which we think is fitting since they’re the workroom drama queens of the bunch.

Turns out, none of the excitement expected by the show or by us is all that earth-shattering. Though it’s implied one person “ruined” the design of another, they didn’t, and Mondo ends up getting along famously with Michael C.

Gretchen does critique Casanova’s look behind his back and is no help fixing its issues, but she executes his idea without blatant sabotage. Ivy micro-manages Michael D’s sewing and dumbs down her design, but she’s the only one that suffers from it in the judging.

We always say the show is really about the clothes, so let’s get to it. You go, Andy! His poolside wrap converts to a sexy swimsuit (top photo), and he proves again that he’s among the top rung of contestants this season. We’ve never been to a resort, but we can easily imagine his girl would be there.

We also like Michael D’s wrap full of cutouts and interesting angles (second photo). Ivy can sew if not create, so the execution is spot on. Living in the South, we know covering yourself in that much black—no matter how lightweight it is—isn’t smart for the tropics, but it looks good on the runway.

Kudos also to April, the 21-year-old Savannah College of Art & Design graduate whose aesthetic is maturing before our eyes each week. Christopher may have the best sewing skills of the group, and April’s “punk rock baby doll” (third photo) certainly benefits. Also black, it reads “negligee” to us, but the judges love it so much that we think Michael Kors pees a little.

Speaking of the judges, producers must not have been able to score any crack for them before the runway show, because they are mostly on target this week. They go a little overboard in both positive and negative critiques, but maybe they’re trying to pump up the excitement. Save from the aforementioned looks, most of this week’s fashion isn’t worth much love or hate.

Gretchen’s jumper again uses the color palette Nina Garcia called “ghastly” in the team challenge. Mondo does Mondo, but it looks immature, and Michael C. goes eye-catching with metallic (fourth photo), but it’s gaudy. Flawed, even their bursts of color don’t much liven up the runway. Ho-hum.

Perhaps here at the halfway mark is the perfect place for a throwaway, including the contestant who does finally go away this week. The real excitement takes place off screen anyway: The finals were filmed on Thursday at Fashion Week.

All 10 of the contestants on this week’s episode created collections for the finals in order to keep the top secret of who’s in and who’s out as the season progresses. If you’re a diehard spoiler crybaby, don’t look at Gawker’s review of the show. But if you’re in for a preview of the Fashion Week collections, click on over there.

Teasers promise a “bloodbath” on next week’s episode. Lets hope it’s true and that the drama is about the fashion, not the bitchery.