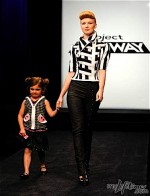 With girls aged 5 to 8 as models, we worried that naming Thursday’s episode “A Little Bit of Fashion” might be a bad omen. Thanks to a fortunate twist, “Project Runway” turned “a little” into “a lot.”

When the main challenge was introduced with a lineup of adorable kids, Jesse pretty much summed up what we were thinking: “Ohhhhh. Crap.”

Jonathan, a talented but unsung member of the now four-member Team Gay, took the thought further, and said so with such slow intensity that you’d think he was warning us of alien visitors from outer space.

“I’m scared of children,” he said wide-eyed. “I don’t surround myself with children, I don’t have any children. They. Are. Very… small.”

Most of the contestants did what they could to lend some design credibility to the challenge. But we weren’t expecting any runway “wow” at the end. Thank goodness, Tim Gunn stepped into the workroom with the twist that saved the day: Take an extra day to create a companion look for an adult.

Seth Aaron may have had an advantage in the children’s challenge by being dad to a little girl of his own. Whatever his insight into what kids want, he turned out an inspired kid-friendly hoodie and denim skirt with an edgy adult look that Kors called “the best construction we’ve seen this season” (top photo).

For his efforts, Seth got a well-deserved win under his hipster belt. We could also have accepted Jay as the winner. The guy we’ve deemed co-captain of Team Gay came in second with a truly chic and absolutely age-appropriate pairing (second photo).

As for the rest of Team Gay, Jonathan took a risk and came up short, Atlantan Anthony eeked out another “safe” despite his ill-fitting children’s look, and Team Co-captain Ben was safe with a so-so girl’s dress and a better adult ensemble.

Of our other favorites, we really liked Maya’s two looks, though she was deemed safe and didn’t get much post-runway time.

A rare mis-step by Amy (third photo) put her in the bottom two. The pieces of Amy’s “house on fire” children’s look didn’t work together, and while we may be the only ones who didn’t hate the clown pants, we give Amy credit for creativity and a willingness to take a risk.

Straight hottie and self-professed gay ally Jesse came in third with a Parisian school-girl and Euro-MILF combo. We actually liked what he wore to the runway show more than the clothes he made, but he did a fine job in third place. And let’s face it, we’re happy to cast our eyes toward Jesse for as long as they’ll keep him in the competition.

In the end, Janeane received a much-deserved auf wiedersehen from Heidi. She should have gone home last week, but we’re satisfied with her departure behind this week’s unimaginative, poorly constructed mall wear (fourth photo). From our perspective, she didn’t deserve to be safe in past weeks either, so we say so long to her mediocrity with no loss of sleep.

In better news, the judges got it right for a change. Michael Kors seemed sober, and Nina Garcia seemed angry. But both were engaged. Maybe the crack and cocktails budget ran low, but the judging was better for it.

Sure, it’s fun when Michael and Nina act all loopy and bitchy, but the winning and losing contestants in almost every episode this season have been the wrong choices. If Michael and Nina need to be on the wagon to make it happen, we’ll take a less catty judging session over misinformed results.

Next week, the Top 10 designers will be working with industrial materials like sheet metal and rivets, so that should be fun. We hope it proves too much and sends someone really deserving away for good. As with any season of the show, it gets better as we slowly separate the designers from the wannabes and winnow down the playing field.