READ MORE | ‘Runway’ coverage and recaps from seasons 7, 8 and 9

Just a week after making horrible hippie costumes that made Adam Lambert and Michael Kors giggle and Nina Garcia snarl, the contestants bump forward a decade to attempt looks inspired by the “Sophisticated ’70s.”

In the drama department, Anya keeps her Mood money in her dress next to her boob, loses it, and cries mascara tears; Viktor is a closet conniver and done helping people; Laura is in denial about her taste level; and Joshua is the worst kind of dumbass – an egotistical one. On quieter fronts, Kimberly does her thing blissfully unaware that others are talking behind her back, and Bert is apparently either on anti-depressants or back on the sauce.

Most of the designers weren’t around for the ‘70s, much less the “sophisticated” ones. We’re thinking Cheryl Tiegs hailing a taxi in a tweed suit and hat, Bianca Jagger doing a Halston halter at Studio 54, or Lauren Hutton dangling dangerously from a hotel balcony on cocaine but still looking fabulous in a willowy silver jumpsuit. Maybe even Laurie Partridge wearing a peasant dress or printed long sleeve mini for a more casual angle. 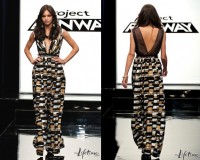 A dosier of classic 1970s looks is provided, so Joshua in keen calculation goes for the worst 1980s mall-wear that even a “Square Pegs” reject would, in fact, reject. Sadly, our boy Anthony Ryan gets the right decade but thinks Squeaky Fromme’s sensibility – look it up, young’ns – is the way to go. In a mid-episode twist requiring a second look, they both make maxi dresses and cement their places in the bottom three (top photo) with Laura’s awful attempts.

Things look brighter for Anya. In what may be the best “make it work” moment in “Runway” history, she shames most of the other designers with a bunch of dyed muslin and a borrowed $11.50-worth of Mood fabric. She is vindicated by the twist to create a second look, manages to keep up with that Mood money, and kicks serious ass with a maxi jumpsuit (second photo) that takes the win. 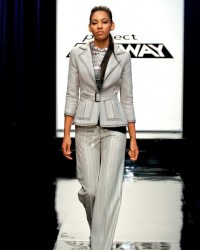 At 57, Bert remembers the ‘70s and certainly serves it on the runway. He gets a good consolation prize and is safe. Viktor’s construction skills are so good that his modified safari blazer and pants (third photo) make it look like he had more time than anyone else. Viktor also whips up a slinky second look that beats most of his competitors’ best. A little bitchy or not, he should win this week, and he’s a definite contender for the finals.

Speaking of skewed results from the judges, we’re fine with the bottom three, and we’re happy thinking either Laura will just go away or Joshua will blessedly disappear from our lives forever. We’re floored when instead Anthony Ryan is eliminated.

Anthony deserves the wakeup call, but not the bullet. It may be the worst call the judges have made all season, and that’s really saying something.

Click any image for a larger view, and check out the all of this week’s looks on the show’s “Rate the Runway” page.