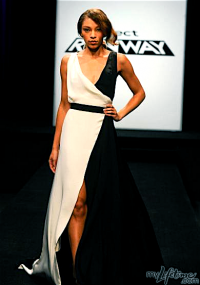 Thursday night saw the most drama all season on “Project Runway.” Another challenge to dress Heidi Klum was a throwaway, but two switcheroos and stress in the workroom made for TV worth watching.

The previews and Heidi’s early-episode clue to the challenge alluded to dressing an opinionated celebrity known for being picky in her wardrobe choices. Who could it be? As we waited for the mystery guest to round the corner, we were all atwitter with thoughts of Lady Gaga, Beyonce or Gwen Stefani.

Nope, just Heidi, who made herself the center of attention for the second time this season by asking for a red-carpet look she could wear “to one of the many” such events she attends. Shit.

We were generally pleased with the Final 6 contestants, and after Anthony’s long-overdue departure last week, we were at least hoping for some good looks on the runway. Glad we didn’t fast forward—or worse, turn off the TV to check out the show during downtime over the weekend.

What’s this? One of our favorite designers all season, Miss Maya is stressed. Really stressed. She disappears from the workroom.

Tim Gunn returns with a sincere concern only he can deliver:

“Designers, I have some news to share with you.”

Long and short, Maya panicked. At 21, she felt she wasn’t ready to finish the season and quit the show. Cut to Jay with fingertips over open mouth. Cut to Mila and Seth with jaws on floor. Cut to Jonathan about to cry.

After that bombshell, they get back to work while the news sinks in. Enter Tim, again.

“Designers, with Maya’s departure, we are bringing back a past designer.”

To his credit, Anthony and his humor were the only bright spots in the workroom. To our disgust, he was the only contestant guaranteed to ruin or bore the runway (with maybe two exceptions, if we’re generous). He was the last to get kicked off, and he did win the early challenge to dress Heidi for Marie Claire magazine, though we didn’t love that dress.

As Anthony gets situated, here comes Tim for a third time.

“Seth Aaron, may I speak with you outside, please?”

Jesus, Mary and Joseph. What now? Turns out, nothing. His model Eastern Euro Whats-er-name accepted a DKNY job and left the show. She was replaced with Irish Whats-er-name who was kicked off last week. Fine.

So all that was a fun departure from the usual. Unfortunately, not-so-much on the runway. Guest judge Jessica Alba brought nothing to the mix, and with three exceptions, the dresses weren’t worth a second look, good or bad.

Two weeks ago, a “Project Runway” first came in the form of two winners when Seth Aaron and Emilio both got deserved credit for the pairs challenge. It was interesting then, so the unimaginative producers who already brought back a Heidi challenge decided again stick to what they know: Anthony and Emilio both were named “the winner.” (Emilio’s sparkly gown, second photo)

Good news and bad news. The bad news is we’re not rid of Anthony’s one-note designs. The good news is he’ll keep us laughing now that he’s back. This season needs something after all.

Jonathan couldn’t get his act together this week and was sent home. His dress (third photo) was his third attempt in the 24 hours of the challenge, and needless to say, he should have stuck to his original idea. He can do better, and we sort of wish he hadn’t crashed and burned.

Next week, the challenge determines who goes to Fashion Week for the big win. If they follow “Runway” history, it will be a couture look that expresses “who they are as a designer.”

The stakes are high, but the bar is low. We know it’s too early, but we’re bored: Seth or Emilio for the Big Win in three weeks.