READ MORE | 'Runway' recaps from every episode this season and last 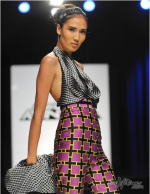 Using their own lives as inspiration, “Project Runway” designers make it personal this week. Most get lost, but two find themselves and their design mojo in the process. Then a runway revelation makes for one the most inspiring episodes ever. We often say “Project Runway” should be more about the fashion and less about the petty drama in the workroom. For once, it’s about both, and we actually like getting to know more about most of the designers. We only shot the finger at Gretchen twice this episode. Reviving last season’s challenge to create their own digital textile patterns, the majority of contestants do better on the fabric than they do in their final looks. Five of the seven remaining designers bore us to tears, but two really create the at-home waterworks by listening to their inner voice and triumphing as a result. And for at least one contestant this week, the runway perfectly melds the clothes and the reality show spectacle. To make the episode even more personal, the contestants are surprised when significant others—in most cases, their moms—show up. Mondo’s keeping a secret, and he keeps it a little longer from his mother during her visit. If you’re a natural crier, the family reunions are a good warm-up for what’s to come.

With so many runway looks so-so-ing the shit out of the runway this time, it’s impossible to recap this episode with just a look at the clothes and no real spoilers. If you haven’t seen the episode yet, stop reading now and consider yourself warned. Mondo plays close to the vest with the personal story behind his graphic plus-sign pattern (top two photos). During the runway critique, he tries to avoid the subject at first with the judges, too. Under pressure, he ultimately decides to “come out” as HIV positive, explaining his “positive” symbols along with the story that he has kept the secret for 10 years. There isn’t a dry eye on the runway. As difficult and important as coming out of the closet—and letting people know that they love or like someone who is gay—revealing a positive HIV status also helps take the stigma away. For someone to free themselves and help others watching in the process is not only brave and emotional, but let’s face it, makes for great TV. Even better, Mondo’s design was by far the most fashion-forward look on the runway. There’s no use holding back the results; he deserves the win for his work and not just for his emotional revelation. Because we're curmudgeonly like that, we will say this: We love the look, but the boldly patterned bottom with a mixed-print top, plus a crop jacket with a coordinating liner is reminiscent of Mondo's Jackie O challenge win--even in the color palette. But it's not a copy, and it works. Perhaps his emerging style is becoming a signature rather than a rut.

April also digs deep and lets her inner demons help her create art. Her free-flowing pattern represents her parents’ divorce, and the execution of her dress (third photo) clearly shows the fractured push-and-pull she still feels about it. Garments by the other designers don’t live up to some of their interesting patterns. Neither horrible nor great, no one else is worth much mention here. Christopher and Gretchen are uninspired, and Michael C’s look is just dumb. Valerie and Andy screw the pooch. That’s OK. It’s Mondo’s night, and we can stand such a powerful departure from our “It’s about the fashion” mantra. Since we can’t get enough, here’s Mondo’s video blog about the episode, including a brief clip of the runway revelation: Click any of the photos here for larger versions or see all the looks in the Rate the Runway section on the official “Project Runway” page at MyLifetime.com. You can also catch up on our "Runway" recaps from each episode this season and last.