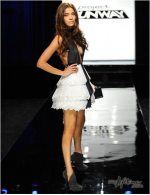 Turning party store purchases into runway looks is reason to celebrate this week. The majority of the designers turn out excellent work and raise our hopes for a better season than “Project Runway” has seen in years.

Think streamers, garland, napkins and gift bags. Now think knockout dresses for garden parties, cocktail soirees, clubbing and a night at the opera. It’s not an easy leap, but most of the remaining 13 contestants rose to these occasions and more.

Pulling out all the stops means that even our picky, opinionated selves are having trouble choosing a favorite, so we’ll just close our eyes, point and land on Valerie’s napkin dress (top photo). The “Susan Lucci of the season” remains often-nominated but not the winner.

Several designers transformed plastic, paper and other breakable, tear-able materials into what looked like real clothes on the runway. From our boys on Team Gay, we must give shout-outs to Christopher’s paper daydress (second photo) and Andy’s exquisite evening mini made from braided ribbons (third photo). In this party of an episode, they are among the guests of honor.

As much as we owe those two gayfers our love, we owe a beat down to the other Team Gay members. In an overall great runway show, they bring up the rear of the pack. Strange materials and toys are supposed to be AJ’s niche, but his ugly dress looks like a piñata turned inside out made worse with low-swinging Mardi Gras beads hanging from the crotch. Michael D. should be in the bottom three for his messy attempt at cocktail attire, and Casanova, well, his attitude and his work are already on our last nerve. We hope to wave bye-bye soon.

Kristen, April and Peach all do well with color and texture but remain in the middle ground of the contestant pool. Of the other middle-grounders, our most sincere kudos this week also go to Michael C. (fourth photo), and Ivy.

Speaking of Ivy, she worked the glue gun like a madwoman to create an elegant gray ’50s-Dior-inspired number. But after it’s all over, she swirls out like a ‘90s circuit queen on a dose of bad X. She faints in a hallway and is rushed off in an ambulance. Maybe it’s the glue fumes, but talk about party ‘til you drop.

The episode ends without resolution to Ivy’s quandary, but a little oxygen infusion and a check-up will probably keep her around. Take your vitamins and drink lots of water, girl! There is no rest for the weary in this fierce competition. And besides, we need your catty comments between scenes.

Moving from catty to bitchy, Gretchen’s two previous, totally undeserved wins apparently went to her head. Just as we were accepting her as Miss Know It All, she becomes Queen of the Fucking World. In interviews, she talks about who she thinks her competition is, and in the workroom, she hands out unsolicited advice like she has Tim Gunn’s job. Not cute.

Hate to say it, but what is kinda cute are her downtown night-out separates (fifth photo). The look isn’t cute enough to move us past her bad attitude, and luckily, it also isn’t enough this week to woo the judges into stupid stupors and hand her the top spot. Just imagine how three wins would feed her delusions.

When it’s time to say auf Wiedersehen at this week’s party, two Team gay members get an earful but are invited back. We hope they don’t overstay their welcome. One middle-ground contestant who we really like as a person and as a designer didn’t rise to this occasion and is off the guest list.