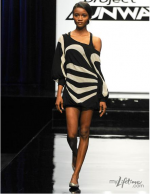 As the final six hurtle toward the finish line, “Project Runway” makes time for a pajama fest with little fashion merit other than to promote Heidi Klum’s activewear line perfect for the cast of “Jerseylicious.”

Charged with creating three looks to complement Klum’s eponymous Amazon.com collection of sweats that an overworked mom or a New Jersey hairstylist would wear out of the house—but everyone else would sleep in—a few designs hit the runway and rise above it (Andy’s best, top photo).

Unfortunately, most of the designers jump right on board for the PJ party, and we are ready for a pillow fight. We almost get one, too.

One of the judges’ chief critiques is that many ensembles look like sleepwear. Duh. Our chief critique is that the inspiration of Heidi’s line looks like nothing but. Color blocks with heather-gray jersey fabric as the key ingredient and oversized hoodies with leggings dominate.

What are the designers to do? Bad challenge.

As the designers delve into it under varying degrees of duress, the past comes back to bite them. The six most recently eliminated contestants return to help the Top 6 finish three looks in two days. They pair up with the likes of Valerie, Peach, Casanova, Michael D., AJ, and Ivy.

Yes, folks, Ivy. The bitch is back and more bitter than even we might imagine. Since the clothes are extra boring and the challenge is extra stupid, there’s plenty of time for Ivy to seek revenge on Michael C., who despite her protests to the contrary, can actually sew and is still in the competition.

After a particularly nasty exchange of words, Michael gets sad, but Ivy stays mad. She flutters about the workroom bragging about how she called him on cheating four challenges ago. Nearly as we can tell, he didn’t.

Moment of the night: Ivy says she believes in karma and editors cut to a clip of a sewing machine needle breaking and flying into her face. Classic.

The whole mess gets so distracting that Tim Gunn comes in and tells Ivy—and everyone else—to get over it.

You’d think the drama would be over, especially as the runway show begins and the former contestants go away, but no. The only contestant bitchier than Ivy is still here, after all. Gretchen has a second melding of her deluded ego and her inability to take criticism.

Before she does, Andy nails all three of his looks, which is needed after a recent slump. Mondo and April continue a strong run at the top of the heap, sticking just enough inside the Heidi Horror parameters to pass, but outside the doldrums enough to make interesting active wear.

As the lower-scoring designers take the stage for critique, Gretchen is lucky that she often designs good clothes. When she doesn’t, it gets ugly. Her first mistake—after creating looks that the girls from Robert Palmer’s “Addicted To Love’ video would wear to bed—is telling the judges that her creations would improve the look of Heidi’s line.

Now, we’re not saying Heidi’s line couldn’t use help, but it isn’t coming from any of Gretchen’s atrocities. And hello? Do you tell a judge that their collection needs work? While other bottom-scoring contestants concede some of the judge’s points, Gretchen never backs down. When she’s not glaring with her arms crossed over her chest, she disagrees emphatically.

Gretchen’s take-away? “Heidi hates me.” Maybe it’s the clothes, jerk. And if Heidi doesn’t hate you, we do. Gloating when you win–and gloating even after you lose–is ugly. And by the way, so is your hair this week. Bitch.

Next week’s episode determines the final four for Fashion Week. Let’s hope for a better challenge with more inspiring results before we head to Lincoln Park for the finale.