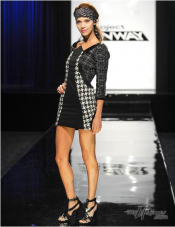 With New York City landmarks as their inspiration, the Top 5 designers seal their fates with a slight twist on a tried-and-true “Project Runway” challenge to determine the finalists.

Last season, the Top 8 paired up to create a day and an evening look inspired by the architecture, colors and textures in one of New York’s signature neighborhoods. It was a defining challenge, revealing that the ultimate Top 2 stood head and shoulders above the rest.

Not so much this year. In fact, no one blows us away this week with either their chosen inspirations or their final garments. Like last year, it’s clear who’s the one to beat, but it’s not as exciting among competition so much less fierce. More black on the runway than ever this season—this week being no exception—may help the only designer who can use color and do so inventively stand out.

Since this is the Final 5—and since the Final 4 will now compete for the top three slots (no one is safe yet) at Fashion Week—let’s take a look at each contestant’s last regular-season challenge by way of their overall performance.

Mondo and April both choose the Brooklyn Bridge, with the former using its op-art angles and the latter poring over the architecture only to end up with the same hard-with-soft, asymmetrical-with-cutouts black getup (second photo) that she has made at least five times already this season. Yes, it’s witchy and all-too expected, but we still kind of like it.

Our boy Mondo also gives us a bit of a rehash, choosing yet another houndstooth mixed with other patterns in a quirky way that works. Now don’t get us wrong; his dress is pretty kick-ass this week and shows us yet another new silhouette and neckline (top photo). We’ve been abundantly clear that we love him and his work, we’d just like to see a hair more variety this week.

Speaking of samey, Andy gets a lot of flack for yet another “Warrior Woman” (third photo). We sort of agree. He may have a customer out there, but we don’t know her, and we aren’t sure we want to.

But Andy’s finishing techniques are impeccable, and we must defer to the idea that his aesthetic simply differs from ours. Now, that said, what his perfectly seamed shiny black cocktail mini has to do with Central Park is beyond us. Period.

Michael C. chooses the Statue of Liberty. Great. Choose the one landmark that’s already wearing a dress to show us how creative you are. We have grown to like Michael quite a bit in a puppy-dog sort of way, but going for a drapy Statue of Liberty gown (fourth photo) is exactly the kind of decision-making that very early put him on our short list for the short bus home.

Remarkably, the judges love his looks time and again. We don’t. With some questionable praise and even more questionable wins, Michael has grown as a designer. But we still say he ends up with a few good looks despite himself. He lucks out with last-minute workroom flukes in crucial challenges. This week is one of them.

Gretchen decides to visit the Lower East Side for inspiration, and like every Middle American, she gets lost at The Limited along the way. If this was the first challenge of the season, she’d be gone. She’s tired; we get it.

We also get that, despite our loathing of her personality as self-appointed judge of the other designers and espouser of how she deserves to be here, she has talent and very strong runway moments.

In a sick way, we enjoy that she lands—speaking of deserving to be there—in the bottom two this week with mis-matched separates (bottom photo). As a testament to her bad personality overriding her talent in people’s minds, only one of the other designers names her among those they’d like to make it to the finals.

If you’re an odds maker, the season scorecard puts Mondo at the top with three-peat wins, three spots in the top rung and only one in the bottom. Gretchen comes in second with two wins, three times in the top and two times in the bottom. Michael C.—amazingly—has two wins balanced by two stints on the worst dressed list and only one time in the top rung. Andy has two wins and two times each in the best and worst categories. April has one win, two moments among the best, and two among the worst.

You decide. So with no spoilers, we will say that we are torn over the results. The person sent home shows great promise, and at least two of the people still in it could leave now with no regrets from us. In short, we would choose a different person—or even two and call it a day—to go home. Since the judges’ opinions are often polar opposites of ours, those people aren’t even up for elimination this week.

The Top 4 go back home to create collections, but no one is definitely going to Lincoln Park. Any three of them could be chosen next week to compete in the Fashion Week finale.