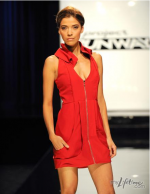 With a billboard in the glittering lights of Time’s Square’s huge exposure on the line, the best news is that several designers rose to the 50-foot occasion. The good news is that the judges weren’t their usual flat-out insane in choosing the top two, but the bad news is that they dropped the ball at the last minute and handed the win to the wrong designer—again.

The fun news is that under the pressure, designers sniped at each other, Mondo went batshit crazy, Peach was a defeatist mess, and Jason’s delusions of grandeur went into wild-eyed nutballs territory with excuses that bordered on Clockwork Orange Scary to match that bowler he insists on wearing.

We were most impressed with the design by Valerie (top photo). As the judges pointed out, a billboard look has be simple but interesting and youthful but sophisticated. It’s not an easy combination to pull off, but Valerie did it with style.

In just the second episode of the season, we’re still reeling from the crowded field of contestants, and we’re already starting to see who’ll be left standing when the currently safe designers in the middle ground go home one-by-one. Other designers with strong work were deemed safe or found themselves in the coveted Top 3. Kudos Gretchen, elegant Ivy and Team Gay frontrunners Christopher (second photo) and Andy (third photo).

Poor little gay gnome Mondo ended up in the Top 3 after a mid-challenge meltdown in one of the strangest interview cutaways we’ve seen in “Runway” history. If we could understand all of it to just repeat the quote, we would. Since he was crying so hard and making so little sense in the portions we were able to make out, it came off something like this:

With jaws off the floor for us and a good night’s sleep for him, Mondo went manic-depressive on us the next morning, all smiles and looking forward to the runway. Maybe his “process” paid off in his design (third photo), but seriously, we’re just glad he’s OK.

A couple of spoilers appear below, so stop reading if you don’t want to know the outcome.

A word about Gretchen. We like her, and we are drawn to her no-bullshit attitude and “green” take on good design. So far, she has shown the kind of talent and thoughtfulness that could win the whole thing. But the adorable little jumpsuit (yes, we liked a jumpsuit, bottom photo) didn’t deserve to win the challenge this week or last week. It needs to be said.

And three words about Nicholas: So long, sister. What a nice guy. His two chances at design were overworked, and this week’s three-piece outfit was a disaster. He’s the first member of Team Gay to go, but we wanted to give him a hug when his mini-meltdown came after being sent home.

No such love for Jason. With excuses galore, another pinned-together mess and the quote “Everything’s stacked against me. I’m a straight guy in a gay guy’s world,” we have just two words for him: auf wiedersehen.

Yep, it was a double elimination. Keep ‘em coming.