‘Runway’ recap: Hats off to the mad hatter 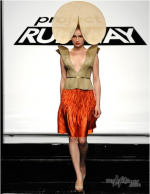 Living up to the wildly creative hats of Philip Treacy is an intimidating challenge. A few of this week’s “Project Runway” designers live up to it, if not spectacularly. Most peter out, and some suffer epic failure.

Treacy’s millinery is more like art than hat making. Some of his designs tower a foot over the models heads, and others span a foot to either side. Some are really just masks. Complementing the toppers without overpowering them is daunting.

The judges, including Treacy, are all over the place with their comments and decisions. None of them appear to be looking for the same thing, or perhaps the giant upside-down dead rose that’s sticking up from the side of Heidi’s head distracts them. It’s another Treacy original, and it certainly has that affect on us.

Ultimately, they do choose the right person to go home, but we won’t grace their picks for the top rung and the winner with further comment. OK, just this: Crack. Heads. Crackheads!

In a switcheroo from last week, Team Gay was on the front end of those who “make it work,” to use Tim Gunn’s line. For our money, Michael D. hit the mark. (As it turns out, Mr. Gunn himself agrees.) Mirroring the lines of the hat and mixing up textures (top photo) was a stroke of artistry, if not wear-ability. Yes, it’s weird, but look at that freakin’ hat. Weird is called for.

AJ also finds a good solution, and if wear-ability is your benchmark, we can agree that he nails it. His polka dot dress works with Treacy’s hat to create just the right summering-in-the-Hamptons look (second photo). Over in the crack house that is the judge’s panel, he is deemed safe and isn’t recognized.

Elsewhere on Team Gay, Casanova goes plain. Though we think he’s lazy and will go home in the short term, he does let the hat shine. When you have a huge wire-cage swirl on your head, simple is probably best.

We can imagine Andy’s design (third photo) in a Technicolor Hollywood extravaganza circa 1952. He modernizes that concept with a shorter, tighter skirt, and we think the fabulosity matches the scale and over-the-top nature of the hat.

Mondo is sort of a mad genius, but we don’t care for his oddball satin vest and mixed print pants. And we felt better about Christopher’s look before he styled it. He’s got skills, but the prediction from other designers that he would be at the top–and who would be at the bottom–couldn’t be more wrong in the end. Shows what they know. Gretchen.

Speaking of Miss Know It All, Gretchen’s design is inventive and definitely captures the essence of the challenge. Sure, it’s a little Robin Hood (fourth photo), but hello, it’s an archer hat with pheasant feathers. For the first time, she actually deserves the recognition that has been so misplaced the last few weeks. Of course, since the judges are on smack, she’s sent off the stage without comment. She makes up for it with plenty of smack to talk about the other designers. Even if the judge’s are wrong, it’s nice to see her sent offstage. We hate her.

We’ve written a lot about “Project Runway” upping its game this season, and we stick to it. But a big challenge definitely separates the middle grounders from the potential finalists. Ivy and Valerie still have a shot at greatness, but this week’s looks weren’t “wow” moments.

Even less successful, April’s “three-panty” resort look was fine in concept but lacking in execution. Peach’s dress would never be worn with the best hat of the night (Give that hat to Christian Siriano-stat!), and Kristin bombs like Pearl Harbor.