‘Runway’ recap: Gretchen puts the ‘I’ in ‘team’ 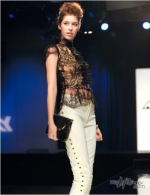 We’re seething during this week’s “Project Runway,” as Gretchen’s true colors become supersaturated and take attention away from the clothes as the 12 designers split up in teams to create two six-piece collections.

Thank you, sweet baby Jesus, for Tim Gunn. The always thoughtful, rarely rattled mentor stays true to his honest nature but breaks his nice-guy character just enough to quell our fumes and put Gretchen in her place. It’s one of his best personal moments in “Runway” history.

But before we get into how Gretchen is as poor a loser as she is a bad winner, let’s lighten the mood with a nod to Valerie. She is full of good quips this week that keep us laughing, and an early one about the other team’s strategy—to each create separate pieces that will combine for six outfits—winds up true for the whole episode.

“It’s like when you have diarrhea and you’re vomiting at the same time. You’re screwed.”

Likewise, this week is a study in contradictions that create topsy-turvy results. First, the teams are off-balance with previous winners and promising contestants on one side, and previous bottom-rung designers and soon-to-go-home contestants on the other. Then the teams have to choose one trend and one textile to define their collections. One group chooses menswear and camel; the other pairs military with lace.

Worried but committed, the other team decides to each create one of the six looks in their collection with a few cohesive elements that tie it all together. For the most part, and certainly in comparison to the other team, it works. Each designer’s own style comes through, making the final runway show dynamic and diverse.

If it were up to us, we’d hand the prize to the whole team, some of whom really step up their games for the challenge. Remember, it’s military and lace. We don’t absolutely love any of the looks, but we admire how they make the combination work in unexpected ways.

We also think it’s nice for this group to get a moment in the sun. Most of them have no chance at the finals. Casanova, who has inspired many a “Get that no-talent annoying queen off!” comment from us, emerges from a major diva moment this episode to deliver an elegant combo of riveted pants and a backless lace blouse (top photo). For once, we agree with the judges that it’s a winner.

With the help of the team, Peach—bless her heart—comes out of her middle-age prints obsession to put color into the collection (second photo) and some edge into her life. With the opposite usual issues as we move from the oldest to the youngest contestant this season, Georgia’s SCAD grad April softens her edge just enough to rock out a nightclub look (third photo).

We also enjoy looking to Michael D. for the second time in a row as one of the standouts. His ultra sheer rocker look (fourth photo) may not work for many people on the street, but his creativity makes us smile.

The losing “Team Luxe” is anything but luxurious. They are so proud and cocky during the runway show for how cohesive the collection is, but matronly, flat and an ugly color palette aren’t the elements that should be the common thread. Ivy’s “Golden Girls” vest with cuffed shorts and riding boots (bottom photo) makes up the worst of it.

Gretchen makes it so much worse. Just as we have grown to despise her more each episode, our anger with her grows each time she speaks. And speak she does, not only micro-managing the design process, but by dominating the runway critique to the point that the judges have to interrupt her just to get a word in edgewise.

She starts with a diatribe about how the team stands united behind the collection they so “love.” Worse, she moves into advice for the judges on what they should be “mindful of” as they select the person to go home. Not smart, but don’t bother her while she’s having a moment. She’s her own worst enemy, and we love it.

Then in a complete about-face, the more Gretchen talks, the more she throws her teammates—and the collection itself—under the bus. Finally, the judges see what we see: an ego-freak whose head grows disproportionately when she does well and whose whole world melts down into nonsense when she fails.

Her runway blather lands Gretchen in the bottom two, and we love that. What we love more is the aftermath after another designer is sent home—the wrong designer in our opinion.

Instead of bidding the auf’d contestant adieu, Mr. Gunn tells him to have a seat. He lambastes the entire losing team for letting Gretchen manipulate them into creating designs that don’t reflect their personal style or their own good sense. He says the eliminated designer has “taken the bullet” for Gretchen’s mistakes.

Here’s a clip of Tim’s big moment of truth.


Click any of the photos here for larger versions or see all the looks in the Rate the Runway section on the official “Project Runway” page at MyLifetime.com. You can also catch up on our “Runway” recaps from each episode this season and last.