‘Runway’ recap: From bridesmaid to bombshell 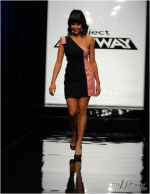 Some of this week’s “Project Runway” designers fulfill the old “You can totally wear that again” promise about bridesmaid dresses with part reinvention, part intervention for real-life former maids of honor stuck with ugly gowns.

The residual effects of last week’s drama that overshadowed the fashion seem to fill most of the 90 minutes, or maybe that’s the part that drags on the most. Michael C. is pissed, Gretchen is shamed but indignant, and Ivy really is clueless. It’s difficult not to get sucked into their sophomoric bullshit.

Look, nobody thinks Michael C. should win challenges—and every viewer and their Tim Gunn knows the judges are on crack when it comes to choosing a weekly winner—but the other contestants’ gang mentality of treating Michael poorly is at least as ugly as the clothes he designs.

That said, back to what we really care about—the fashion. When you get a poly-satin floor length Pepto Bismol monstrosity with white shoestring laces down the back and use it to create a kickass mod cocktail dress, you deserve to win. For our money, Mondo’s results (top photo) are awe-inspiring.

Even after a designer showcase with the public in which Mondo’s design gets the most votes, the judges still don’t choose him for the win. Did we mention they’re on crack? They prove it in the abomination they do choose.

We also liked another design by a member of this year’s mostly solid Team Gay. It’s impossible to see the boofy bridesmaid dress Andy had to work with when looking at the sporty, edgy separates (second photo) that come out the other side.

Not a designer we identify with personally or aesthetically, we gotta give it up this week for April. She stuck to her guns when the bridesmaid kept interjecting random ideas for the design, and ultimately created her most sophisticated dress to date (third photo). You go, Georgia’s SCAD grad.

Other designers who create real transformations with what they had to work with include surprising simplicity from Casanova and—ugh—Gretchen. Both of them are so annoying personally that they, like the expanded time given this season to the workroom drama they create, detract from any good work.

We’ll also throw an atta-boy to the Team Gay member we think is among the most talented this season. Christopher’s cocktail dress (bottom photo) wasn’t the best thing on the runway this week, but considering the tapestry tube he started with, he worked real magic. Unlike many other designers, he also used very little new materials in the bulk of the look.

Ivy makes tuxedo pants from the original dress with a totally new top, and we almost nod off as it walks down the runway. Valerie would be really fun to hang out with and makes a valiant effort, but she misses the mark this week.

Sucking mud are Peach and Michael D. Peach goes off the reservation then off the planet, and an otherwise talented Michael D. gets too lost in his model’s plus-sized frame to make it work. They deserve to be the bottom two, and in our book, with Michael C. as a close third. Their bridesmaids are now guilt-free to throw away the dresses they’d hung onto.

If you’ve seen the episode, you know those three are among those that get singled out for runway critiques, but we’ll leave it at that. Did we mention the judges are on crack?