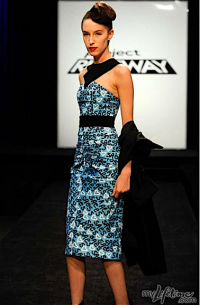 In a “Project Runway” first, Thursday’s episode asked the contestants to design their own textile for use in their runway looks. As usual, some soared, some slipped by and others tanked in their efforts.

The designers used print-making software that allowed a broad spectrum of applications, from scanned images and repeated shapes to hand-drawn patterns and paintbrush-like strokes. Once the designs were done, a specialty service digitally printed the fabrics and delivered them to the workroom.

Since there haven’t been many (we might argue any) stunners this season, we were hoping for a huge mess to keep us entertained. That didn’t really happen on the runway, but as if on queue, the cast of contestants provided the reality-show goodness we were craving.

Let’s face it. Hot Mess Anthony is good TV. That’s why they’ve kept him around so long. The gay-as-Christmas-Day Atlanta designer never shuts up, and he’s really just as nice as he is funny.

“You know, I blame Beyonce for everything that goes wrong in my life. It’s something about her song that will make you think, first of all, that you are a Size 4, that you can conquer the world, and that you can, I don’t know, be all powerful,” he blathers to everyone and no one.

“Do you think Beyonce has a song for the people who can’t find a job or the interview that you didn’t do so well in? Do she sing any song about that?”

Cut to the other designers laughing, and intersperse video-diary comments about how funny he is. Cut back to Anthony, now talking about his imaginary guest spot on Oprah.

And so forth. It’s a fun diversion while waiting on the digitally printed textiles to arrive. When they do, almost all of the fabrics turn out pretty well in their uncut form. Textiles designed by Seth Aaron, Maya and Jay are standouts in a good way, the one by Mila more like a sore thumb.

Tim Gunn steps in to critique and is the first to point out that Emilio’s self-branding ESOSA (Emilio Sosa) repeated pattern, with a heart for the “O,” looks like it says ES (heart) SA.

Pretty funny stuff when you consider that they are the only two straight male contestants left. Emilio was not amused.

He ignored Tim and, according to the judges on the runway, won the challenge (top photo). According to us, Seth Aaron whooped his ass up one side and down the other with the use of his Britpop punk window-pane textile (second photo).

With just seven designers left, Jay is deemed safe, and the remaining designers “represent the best and the worst” for judging. Besides Emilio and Seth, Maya’s overall look won praise.

Of the bottom three, Mila and Anthony both fell far short, but in our opinion, Jonathan’s was mostly fine. A really fucked up jacket (Worn backwards? Maybe? With gold lame? Kinda?) ruined a dress that would have been much better alone (third photo). More fun: Jonathan and Michael Kors trade catty words when the judges hate on the look—hard. Nothing like a little bitch fight between two opinionated gay guys to bring some life to the runway.

Now look. We haven’t been shy—since the second episode and even as recently as last week’s special section on the topic—about our sincere wish that Anthony be eliminated for his one-note design aesthetic. If you’ve seen one formfitting asymmetric cocktail mini, you’ve seen ‘em all. We saw another one this week, this time with his kooky textile and a scary shrug (bottom photo) in place of the usual ruffle.

We started to wonder about Anthony’s ultimate fate this episode when he got even more airtime than usual. When the producers and editors let him wax on (and on) in the scenes we’ve described—and several more—we realized he might be in trouble. He was.

We’ve done all our bitching about his work, and we’d feel we were piling it on to take more stabs now that he’s gone. He handled the auf’ing with more grace than most designers and all the Southern charm you’d expect. Our offer to have a cocktail with him and dish still stands.

Previews for next week are cryptic. Not only is there a surprise guest “known for being opinionated,” but apparently Tim breaks dramatic news that floors the Final Six designers.

Something tells us it’s not just a ratings trick. Something happened behind the scenes that will rock the “Runway” universe. Or, at least we hope so.