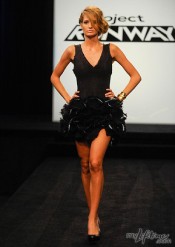 If the first two weeks of “Project Runway” Season 7 are any indication, Heidi and crew are fixing what they fucked up so royally last fall. Personalities are big, designs are good, and that’s just the way we like it.

We were so nonplused last season with the move to Lifetime from Bravo that we almost stopped watching. We openly wondered if the network itself, with its straight female target audience, was to blame for moving away from the gay with unqualified contestants, the most boring “gayest moment ever” that was promised, and the ultimate snooze fest that were the final three contestants and the finale.

But things are looking up. The freak factor is high (Hey, Ping! How you doin’?), the fashion is forward, and the giddy gaydar is going off again.

This season’s contestants seem to reflect the knowledge that casting a gay designer isn’t enough for gay viewers without some talent to back it up.

With a couple of exceptions, Season 7’s two runway shows so far highlight some really creative, skilled work from gay designers, and some good witty banter to go along with it.

Wednesday’s burlap challenge, in which most of the remaining 15 designers crushed the daunting task of turning potato sacks into cocktail couture, was a fabulous fashion feast. We had to rewind twice to get a longer look. Gay designer Jay won (top photo) with a cocktail dress that resembled expensive organza more than it did burlap when he was finished.

Based on the other designs Wednesday, we’re keeping our eyes on Amy (second photo), Emilio (third photo and the first episode’s winner), straight ally Seth Aaron (fourth photo) and Anna (fifth photo). Click to enlarge them.

We introduced you last month to this season’s Team Gay, a group of four men who the producers touted as the “out” contingent among the designers, along with three straight allies who wanted to be recognized as playing—figuratively—for our team.

One of those allies, Pamela, went home Wednesday for what was a decidedly ugly dress that made her model look not only like a hooker in a rodeo, but bigger

than she actually is (bottom photo). So long, sister!

In our introduction of the gayfers, we were curious why Atlanta designer Anthony wasn’t mentioned, since he is, in fact, gayer than Christmas. The first five minutes of the season premiere put our questions to rest.

“You think it’s easy growing up in Alabama as a gay black man? No it is not.”

And there you have it. Why producers didn’t include him in the initial Team Gay announcement is beyond us, but it was nice to hear him say it.

Unfortunately, as affable—if dim—as Anthony is, he is among the exceptions to the pool of strong gay talent in Season 7. He was in the bottom two the first week, and wasn’t a standout on Wednesday. Once they weed out the truly undeserving designers, he’ll be on the chopping block. In the meantime, Anthony is good comic relief.

Also breaking our hearts on Team Gay is Jesus, who has been in the bottom three

both weeks, and oh-so-deservedly so. His heavy cowhide evening gown from Week 1 with a seam across the knees was a disaster, and he completely covered the burlap in the burlap challenge.

If we could understand him when he talks, maybe we’d understand what the hell Jesus thinking. Having a slightly less hideous product than the catastrophes that went home is nothing to smile about, darling.

The other guys on Team Gay—Ben, Jonathan and cute straight ally Jesse—haven’t jumped out yet, but their showing solid work on the runway and giving articulate analysis in their interviews.

It’s a good thing for “Project Runway” that loyalty to the series from its time on Bravo prevailed, barely, last season, making us wait through Season 6 to get to this point. We just hope they keep it up and hold our interest.