‘Runway’ recap: Eliminating an hour of your life 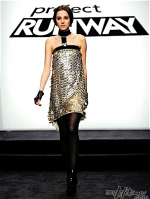 It’s almost a shame to call this week’s “Project Runway” episode “Finale, Part 1.” Tim Gunn’s visit to the designers and the elimination round for the final Bryant Park slot were anti-climactic, time we’d like to get back.

The episode might be better buildup to the big event if the producers would just create a two-hour special for one week, ending in the collections of all three finalists and the ultimate win. Instead, we got to see a lot of uneventful personal interaction and almost no clues to the finalists’ collections.

They did show a lot of clothes by our boy Seth Aaron, which surprised us, but then he took Tim’s advice and apparently started over. His Bryant Park collection remains a mystery, with just a few flashes of fabric flashing by in clever edits. It looks colorful and appears to mix some prints in creative ways.

What we saw of Emilio’s line was hideously matronly in cut and style. The textiles shown (incorporating his name/logo branding, natch) were Churchy Old Lady at best.

Again though, we hope they just didn’t show us enough of it in order to maintain our suspense for the final runway show.

The only good TV that could have come out of this episode would have been for Jay and Mila to continue their cat fight as they competed for the third and final spot in the Bryant Park runway show. They didn’t. After one bleeped-out name calling incident (Mila called Jay a “little fuck” or a “little fucker”), they made up almost immediately upon seeing each other in New York. BORing.

The two hit the elimination runway with three looks each. Finally, some clothes on a show about fashion.

To no one’s surprise, Mila is showing a mostly black-and-white, ‘60s inspired collection (top two photos). Of course she is. But the clothes are good. A shimmery evening look is definitely outside her usual realm, and the construction on all her looks is impeccable.

That’s why we’re OK with losing the last hope for Team Gay.

Yes, Jay’s collection was funky and showed some talent, but it was also overworked (bottom two photos). So besides the fact that Lifetime Television For Women was more likely to put at least one female designer through to the finale, we say Mila deserved it based on the merits of her work.

Jay’s elimination in the final minutes of the episode felt more like the elimination of an hour from our lives that we’d rather get back. So as for more commentary, we got nothin’. If the goal was to heighten our anticipation for next week—which also includes a Season Reunion half-hour after the finale in the “Models of the Runway” timeslot—the ploy may have worked. But ultimately, they could have just broadcast a re-run with more fashion and we’d feel the same way.

Click any of the photos here for larger versions or see all the looks in the Rate the Runway section on the official “Project Runway” page at MyLifetime.com. You can also catch up on our “Runway” recaps from each episode this season.