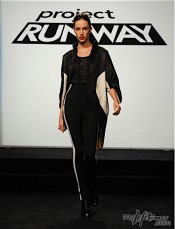 Thursday’s “Project Runway” episode reminds us how far we have to go in Season 7 with 13 contestants still in it to win it, including all of Team Gay—and how far we’ve come from last year’s debacle.

The challenge this week was to pair up in teams and take inspiration from the Metropolitan Museum of Art’s collection of iconic dresses. The display included looks that mere laymen would recognize, even if they don’t know that the era-specific looks are attached to names like Dior, Saint Laurent and Balenciaga.

Trouble is, from a gallery full of color—silver, garnet, pearl, sienna, pink and tangerine—every single one of the “Runway” designers all walked away with the same idea: black. It made for a very monochromatic runway, despite pops of color by a few designers.

One more issue: none of the resulting “signature looks” during Thursday’s competition could hold a candle to the Met’s gallery. We weren’t expecting masterpieces from these newbies, but some originality and at least one that blew our minds would have been nice.

A sportswear-inspired separates look (top photo) designed by Mila was the episode winner. We didn’t hate it, but in our minds, it certainly didn’t fit the elegant inspirations of the challenge. And while Mila spent the entire two days of the challenge constructing the coat, her partner, Team Gay workhorse Jonathan, did everything else—and we do mean everything.

With Mila’s win comes immunity from elimination next week. Since Jonathan sewed the majority of the winning ensemble, we’re hoping for a verbal throw down about it in the early minutes of next week’s episode. Even better would be a meltdown on the runway if Mila’s immunity threatens the results.

The challenge “twist” was to create a second, last minute “look for less” inspired by one of the other team’s “signature looks.” It was a throw away twist, that’s how the designers treated it, and that’s what we would do with almost all the resulting dresses—throw them away.

One exception was a dress by last week’s winner, Team Gay member Jay, who along with teammate Maya, managed to out-do the “inspiration” for one-tenth the cost.

Sadly, Jay blew off the whole episode because he had immunity, much to Maya’s chagrin. Nevertheless, in our humble (?) opinion, the combination of their “look for less” and “signature look” (second photo) should have won. And if we had to choose another eligible winner, Amy’s dress (third photo) was also stunning. We would have been happy had she taken the immunity, but her teammate, the tragic Jesus, dragged her down.

Speaking of tragic, that category was taken hands down by Ping’s design (fourth photo). She lost and was sent home. We liked what a huge freak she was and how out-of-the-box her designs were; it added to our enjoyment of the show.

But we admit, sending Ping packing was the right decision. Despite her manic work, including a stubborn refusal to listen to her teammate, her dress ended up looking like the model ran out as Ping draped the fabric and never came back until it was time to walk down the runway.

Ping’s catastrophe was a lucky break for Jesus and Anthony, the gayest Team Gay members, both with limited abilities and even more lacking eyes for design. Anthony is from Atlanta, so we have to pay attention to him, but he and Jesus have been in the bottom two twice in just three episodes. We’re counting down until they’re out of our lives forever.

Queen Bitch Judge Michael Kors said Anthony’s dress looked like a Cotillion from Hell, and we couldn’t say it any better than that. Jesus got an even bigger break than Ping’s loss when he got to choose his partner, last week’s winner Amy. As we said, her final look was beautiful, and his “look for less” put them out of the running.

Those of you following our recaps may remember that last week, we had our early eye on most of the good designers we’ve already mentioned: Amy, Jay, Mila and Maya. We still think Anna and Emilio are awesome, too.

It’s just the third episode of the season, so with only the “best” and the “worst” getting extended airtime, the majority of contestants are deemed safe and swept off the runway without a chance for us to see their designs again. Thank the gods for DVR and Tivo, because a few of our favorites have yet to get their moment in the judging spotlight.

Based on the teamwork and results shown this week, we still have high hopes for Team Gay: Ben and Jonathan, as well straight allies Seth Aaron and poor, hot Jesse, who tried to reign in Ping this week. Their biggest moments are coming.

Despite most of the contestants playing it safe on Thursday, we still think that the Season 7 designers are longer on personality and talent than last year’s bunch. Still stinging from last season, we must keep our fingers crossed that it doesn’t go downhill from here.

Click any of our photos here for larger versions, and see all of Thursday’s looks in the Rate the Runway section on the official “Project Runway” page at MyLifetime.com.