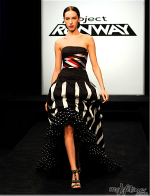 A trip to Ringling Brothers fed the final challenge to see who goes to Bryant Park on “Project Runway.” Sadly, it took 12 episodes to see a perfectly stunning look. Worse, there was just one.

Without much drama in the workroom aside from the Jay-Mila cold war and the Mila’s-jealous-of-Emilio dumbness—which even they are growing bored talking about—the final five designers went to work creating high fashion using circus-inspired concepts.

When Tim Gunn was in Atlanta earlier this season, one thing we didn’t report was that he said Emilio is “as arrogant as he is talented.” We didn’t want to believe it and hadn’t yet seen the evidence, but we should have known straight-shooting Tim wouldn’t just say something like that. Emilio showed it in abundance this challenge.

But you know what? Even if he doesn’t handle it gracefully, the mo-fo wins and wins and wins, setting records right and left for wins in the history of the show. His entitlement, however ugly, is based in true talent. We agree with Michael Kors, who said Emilio’s winning look (top photo) was by far the most high-end, well-tailored gown we’ve seen on all of Season 7. It was gorgeous from every angle.

And not to say we told you so, but we so did. When we said Emilio and Seth Aaron for the win in Bryant Park last week, we got it right. Seth’s ringmaster (second photo) was not his best this season, but he, along with Emilio, was quickly whisked off the runway and into the final.

Next came ratings booster Anthony, whose personality kept viewers coming back for more all season. Despite his assertion that he wanted to go outside the box, the long version of his lackluster style didn’t speak fashion, much less circus. His graceful—second—exit reminded us why we like the guy even if we hate the clothes. He was auf’d faster than you can say “queen for a day.”

Of course, with one spot left in the final, foes Mila and Jay awaited their fate, interspersed with their interview comments slamming the other’s sense of design.

Jay’s military-inspired jacket and pants (third photo) were pretty Michael Jacksony, but the overall look was beautifully made and more than fine. Mila’s inconsistency this season fell to its lowest point this challenge. Though it was never mentioned, her ugly sister look to Seth’s ringmaster (fourth photo) was a clusterfuck.

Like the Chris March silliness a few seasons ago, Mila and Jay will both design collections and be judged to become the third finalist. If Jay doesn’t make the cut, he will be this season’s last hope for Team Gay. He has been consistent, but expected, all season, so we’ll just have to wait and see.

And we’ll have to wait a week longer than usual for a totally fresh runway show. Next week’s episode is all about Tim visiting the final four as they design their collections. We’ll find out at the end of the April 15 show who the third finalist will be on the April 22 finale.

Click any of the photos here for larger versions and the designer’s names to see their full season of looks. See all of this challenge’s looks in the Rate the Runway section on the official “Project Runway” page at MyLifetime.com. You can also catch up on our “Runway” recaps from each episode this season.