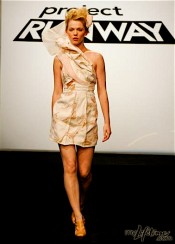 It was a bittersweet victory for Team Gay on the most recent episode of “Project Runway.” The results of fashioning looks based on earth, air, fire or water mostly created natural disasters.

Not so for our long-ignored Team Gay member Jonathan, who won the night with his interpretation of air (top photo). He made his own multi-layered textile and took his model’s coloring into account to create a head-to-toe look that won over us and the judges—one of the few times we’ve been on the same page with them all season.

On the flip side, Ben took one for the Team when the uber-talented designer’s mess of a pantsuit not only revealed his first misstep and plummeted him into the bottom two, but ultimately sent him packing. We’ll miss his innovation on the runway and bid him a fond farewell.

Few of the designers pulled off an ensemble worth a second glance, and like Ben, most spiraled viewers into Hot Messville or perhaps worse, mediocrity. That includes most of our favorite designers this season.

When we think, earth, air, fire or water, we certainly don’t expect a runway full of black and gray. We’d accept that creative license buys designers the right to do what they feel, but only if the end results work.

Worst of the bunch was our dear, sweet Amy. She screwed the pooch by incorporating hair extensions that filled the “bowl” neckline of her garment. In her mind, it represented fire. In the minds of the judges and us, it just looked freaky. She was in the bottom two with Ben and survived only by the merits of her earlier work.

The only designers on our good side this week were still among our favorites of the season. Again, the judges agreed with us for once: Seth Aaron’s “night air” look (second photo) and Maya’s water-inspired mini (third photo) met the challenge. They were in the top three with Jonathan.

This is crappy timing in the season to see so few stunning looks. We’re getting down to the wire, with eight designers left. Of those, three of our five original Team Gay members remain: Jonathan, Jay and Atlanta’s Anthony. Let’s hope the tide turns quickly on the runway quality before the big Bryant Park finale finds a winner.