‘Runway’ recap: Boys (and girls) in the ‘hood 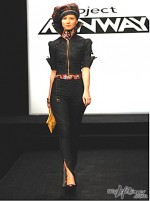 Four iconic neighboroods. Four teams of two. That’s the starting lineup for the latest “Project Runway” challenge that took the designers to Harlem, the East Village, the Upper East Side and Chinatown.

It’s an interesting concept: Pair up and put your heads together to create a day and an evening look inspired by the architecture, colors and textures in one of New York’s signature neighborhoods. Sadly, with half of the original field of contestants gone, we expected better results from the top eight designers.

Seth Aaron and Emilio, the two straight guys left in the contest, took to the streets of Harlem. Jay and Mila went to the East Village, while Jonathan and Amy went to the Upper East Side. And depending on your point of view, Maya got stuck with Anthony—or Anthony was saved by working with Maya—in Chinatown.

Much juicier than that: Mila and Jay openly dislike one another. As a team, both tried to remain civil as they trolled the East Village noting the graffiti, edgy people and bright colors. None of those elements came into their work, probably because they spent most of the workroom time sniping to the camera behind each other’s backs. Mila fared better than Jay, but neither ensemble was very inspiring or up to the challenge.

Seth Aaron and Emilio rocked the Harlem looks, giving us the denim, primary color palette, tile work and edge we saw in their visit to the neighborhood. Their daytime jean suit with gold stitching combined their design aesthetics perfectly (top photo), and their evening look used the denim element to update a classic jazz singer look (second photo).

The guys both took the win, marking the first time two people have been named the winner on a “Project Runway” episode, even on team challenges. But if Emilio and Seth were in the zone, the others were zoned out.

Anthony and Maya got a lot of praise for their muted vision of Chinatown, though we weren’t super enthused (evening look, third photo). At least their outfits weren’t as jarringly bad as the teams doing the Upper and Lower East Sides.

Jonathan and Amy frantically overworked both their looks and came out looking like they napped through their trip to the Upper East Side. Amy was in desperate need of redemption after the hair bowl she created last week, but her mediocre shirt-dress made her skinny model’s ass look huge.

She paid the ultimate price when she was auf’d in the final minutes of the show. There were worse looks on the runway this episode, but the judges still had hair in their mouths over that side street she veered down last time.

As her partner, Jonathan’s evening look didn’t do much better, though the vision was there. He should have cried more over his messy cutouts (fourth photo) than Amy’s loss. We’ll miss Amy, though. She is sweet, creative, and much better than her last two efforts.

That leaves seven designers –three guys left on Team Gay, inexplicably including Anthony—vying for the win in the March 25 challenge to create their own textiles for use on the runway. Since we’re not expecting any “WOW!” moments this season, we’re hoping for a clusterfuck to keep us interested.

About Anthony
If only by the mistakes of other designers and the skin of his teeth, Anthony slides by for yet another week. We know we’re hard on Anthony, and we feel bad because he’s a nice guy. His designs are just not worthy of even a show that’s going downhill, and he is just so dumb.

We don’t say that lightly. He backs us up every episode. This week, Heidi gave the designers the least cryptic clue to the challenge ever: “Your work will put you in a New York state of mind.”

Cut to Anthony: “Hmmm. I’m not exactly sure what that hint means, so I’m going to wait until I have all the details of this particular challenge before I go trying to flood my mind with unnecessary thoughts.”

Cut to Tim Gunn: “Designers, you will be using New York City as the point of departure for your designs.”

That was a tough one, Anthony girl, but we digress.

Anthony’s (much to our dismay) winning look from the “Heidi on the cover of Marie Claire” challenge is on newsstands now. As predicted, they cropped the photo to Heidi’s face to show almost none of Anthony’s one-trick dress. In fact, the dress looks remarkably like the Chinatown dress above.

Sorry, Anthony, we’d have a cocktail with you, but no one we know would be caught dead in your designs.