‘Runway’ recap: And we have a winner…

READ MORE | ‘Runway’ coverage and recaps from seasons 7, 8 and 9

An upset victory in the Season 9 finale of “Project Runway” doesn’t leave us upset at all. In fact, we’re nonplused, which may be less satisfying. If we're feeling anything at all, it's relief that it's over. Tim Gunn and the show were on a high early last year when he confirmed to an Atlanta audience, “That dreaded Season 6 will never leave us alone.” Of course, he said it as the show was wrapping the much-improved Season 7 that ultimately saw Seth Aaron Henderson win against worthy competitors. At the time, Tim had no way of knowing that Season 8 would rob Mondo of victory in favor of the evil Gretchen. He couldn’t foretell that Season 9 would make “Runway” history for its least talented gaggle of freaks with the fewest “wow” looks ever. He had no idea that the biggest emotional impact of this week’s finale would be the sigh of relief when psychologically stilted Joshua does not win.

But for a time during the episode, it surely looks like Joshua is headed for the winner’s circle. Ever the editing tricksters, “Runway” overloads us with clips of the judges’ effusive praise for Joshua’s combinations of acid neon, cheap plastic and granny’s high roller Vegas curtains (top photos). The judges are right about two things: The collection is actually toned down – for Joshua – and he does have some good ideas mixed into the cacophony. The finale dirt that Viktor dished with a few teaser looks didn’t provide clues to the number of changes he ultimately makes to the collection. It’s clear early in the final critique that Viktor over-edited his collection and that the judges aren’t having it.

Sadly clutching defeat from the jaws of victory, Viktor cuts down the number of stunning prints (second photo, right) and adds too many black see-through numbers (left) that create a disconnected visual thread. Does he show the best construction and tailoring? Yes. Does he create the most diverse, wearable collection? Yes. Does he come in third for no apparent reason? Yes. In a season that made the personalities more important than the clothes, we love Kimberly the most. Sadly, we’re on the same page with the judges about her collection. With the exception of a stunning separates set (third photo, left) that’s out of place among a whole mess of ugly, Kimberly’s showing is weak. Her other high notes are hidden under weird jackets (right) or are worn in bad combinations. 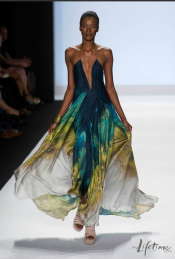 So who does that leave for the win? Anya of course! The perky beauty queen has come a long way from sex-tape scandals and limited sewing experience to become a master of choosing prints. Apparently, draping those fabrics from models' necks and shoulders impresses the judges more than it does us. Even as Heidi, Michael, Nina, et al note that eight of Anya’s 10 looks feature the same neckline, that the looks are not perfectly sewn, and that pretty much no one would wear the clothes in everyday life, they gush about female voices in fashion and Anya’s potential to improve. One exception to Anya’s underwhelming one-note show is her remarkable opening look (bottom photo). It’s our favorite of the night. And again, we're just glad that Joshua doesn’t win – and not surprised that he is the only non-winner to bitch and moan ungracefully in defeat. From the Project Q couch, the neighbors might have heard shouts of, “Oh shit. They’re going to give it to Joshua,” “It’s Gretchen all over again,” “No no no no no,” and “Whew! Thank god!” The only response from the other end of the couch? “Worst. Season. Ever.” We sor-ry, Heidi. Dat means you out. Auf wiedersehen. Click any image for a larger view, and check out the all of this week's looks on the show’s “Rate the Runway” page.