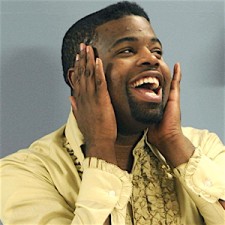 Three judges will score their runway show, and Williams is the headliner. He used to work at Neiman Marcus in Atlanta as an image consultant, so when it was time to find a celeb judge, he was a natural.

Williams remembers sending in his application for “Runway’s” Season 7 on the last day they were being accepted.

“They later invited me to audition,” he recalls. “I screamed up and down. Every two weeks it seemed, I had another audition.”

Eventually, he made it into the final round, was one of the chosen 16, and ultimately, he became the most unforgettable personality of the season.

Originally from Birmingham, he’s now an official Atlantan. The freelance fashion designer was part of a number of openly gay male contestants this season, but in the end, the winner was straight designer Seth Aaron Henderson, who upset the favored Emilio Sosa to win the competition.

Williams was happy to be part of a season that featured so many gay men.

“The fashion industry is populated by men,” he says. “I think there are a lot of talented designers who just happen to be gay. It does take a lot to come on national TV and be yourself. Closeted gays are not the best candidates for TV.”

Williams was particularly pleased when a fan told him that his mother hated gay people, but “fell in love” with him on TV.

On “Runway,” he came across as wisecracking but warm. He says that is who he really is.

“I was a witty person from the start; that’s who I am everyday,” he says. “People ask my family if I’m like that, and they say yes.”

He realized early on that personality goes a long way on reality TV. “‘Project Runway’ is about entertainment; it’s not just a sewing show,” he says.

Williams was eliminated from the show in Week 10, but in a twist of fate, was brought back when contestant Maya Luz left for personal reasons. He won his first challenge back, tying with Sosa in a red carpet challenge, and also won perhaps the season’s biggest challenge – designing a look for “Runway” star Heidi Klum that appeared on the cover of “Marie Claire” magazine.

He admits he was close to both Emilio and Jay Nicolas Sari during the shooting, particularly the latter. “Jay and I have scheduled a trip together,” he says.

The outspoken Williams says he liked Seth Aaron’s final collection, but thinks Emilio’s should have won.

Asked what he thought of finalist Mila Hermanovski – who sparred with Jay throughout the season – Williams doesn’t spare sentiments.

Williams plans on staying in Atlanta and designing his own line of evening bags. At some point, he’d like to meet fellow “Runway” designer and Atlantan Mychael Knight.