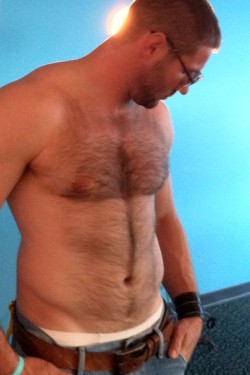 English rugby star Ben Cohen–a straight sex symbol combatting homophobia–arrived in Atlanta this week for a haircut, photo shoot and the launch of a U.S. tour to promote his new anti-bullying organization.

It’s been a whirlwind of activity for Cohen since late last week–he shocked supporters by announcing his retirement from the sport he’s called home for 15 years, crashed in a New York apartment for a few days, and then flew to San Francisco. That’s where he noshed with celebrities including Kim Cattrall at the GLAAD Awards (second photo) before heading east to land in Atlanta late Sunday.

From there, it’s been a haircut (third photo) and off to a photo shoot (top photo) for the latest rendition of a calendar that gay fans breathlessly await. He’s been teasing fans by posting outtakes from the photo session on his Facebook page.

But it’s all a warm-up to a four-city Acceptance Tour to launch the Ben Cohen StandUp Foundation, which is being billed at the world’s first anti-bullying organization. The tour, which includes New York, Washington, D.C., and Seattle, kicks off in Atlanta on Thursday with three days of events with his local host, the gay Atlanta Bucks Rugby Football Club.

“To be honest, I would never have imagined my career was going to move in this direction after my professional rugby career, but here we are–it’s happening. It is incredibly exciting and we have so many plans in the pipeline to be able to make a difference,” Cohen says in his retirement announcement on his website.

“In my view, rugby is a very inclusive sport. Everyone can get involved in one way or another, so I will be using it as a vehicle to drive my message of acceptance out to people from all walks of life, everywhere. There is a lot of work to be done. Attitudes need to change. Young people should not be bullied into taking their own lives. That is what is happening and it needs to stop,” Cohen adds. 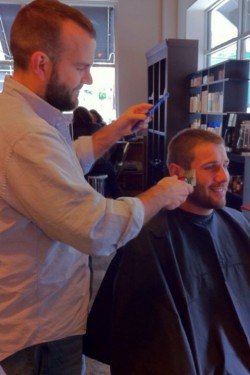 The Atlanta events open with a Meet & Greet on Thursday and include an on-field exhibition and private dinner with Cohen and supporters. Tickets are available from the Bucks.

Besides the considerable press attention Cohen’s retirement received overseas, his U.S. publicity blitz for the foundation is working, too. He appeared on “Michelangelo Signorile Show” on Sirius on Thursday; the New York Times profiled his efforts to combat homophobia on Friday; the GA Voice talked with him for their cover story on homophobia in sports that also hit the streets on Friday.

“I’ve never seen a straight athlete do this before. I’m really passionate about this,” Cohen tells the GA Voice. “I have a big following, I have a voice, I want to use it. I’m in a privileged position and I want to set a precedent. Being gay is not a disease, it’s not a choice.”