Roy Barnes called; he wants his office back 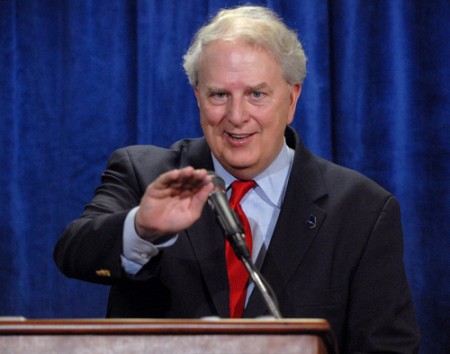 Chub chasers and gay politicos delight — Roy Barnes wants his bed back in the governor’s mansion.

The once-popular, even progressive, former governor announced Wednesday that he’s planning a return to public office. Trouble is, he lost it in 2002 when state lawmaker Sonny Perdue ran him out of town with a populist campaign that painted Barnes as a power-hungry, out-of-touch technocrat.

Barnes’ fans Inside the Perimeter prefer to call that progressive with a willingness to tackle the tough issues Perdue has let wallow for eight years.

With the chubby, disheveled Barnes now in the Democratic primary, he is instantly two things: The front-runner and the most gay-friendly of the candidates. For the latter, though, it’s not saying much.

Barnes, as Southern Voice recounts in their coverage of his announcement, was the first sitting governor in Georgia to appear before a gay organization — his talk in July 2000 to the Atlanta Executive Network — and later met with Georgia Equality and the Human Rights Campaign in the 2002 campaign. He even interviewed with SoVo a week before the election. (Let’s hope he doesn’t equate talking and meeting with the gays as a sure-fire way to lose a statewide election, though his Republican opponents are sure to paint it as such.)

I was there when Barnes met with AEN at the Four Seasons on 14th Street — not as Project Q Atlanta, mind you, as this blog wasn’t even a twinkle in my eyes way back then. He didn’t say much of anything that made headlines, but the visit was historic nonetheless.

But the governor introduced his speech by making it clear he knew his audience: “I’m glad to be here to talk with you as Georgia taxpayers and Georgia citizens who just happen to be gay and lesbian citizens of the state of Georgia,” Barnes said, drawing thunderous applause from the more than 400 attendees.

During a brief question-and-answer session following his speech, Barnes expressed strong support for principles of tolerance and non-discrimination, but wavered on gay adoption and did not endorse any specific gay rights proposals.

“People should be hired on merit, regardless of anything about them—what color they are, where they came from, or anything else, sexual orientation included,” he said.

Barnes hedged when asked by a member of the AEN audience if he would support a law “affirming the rights of gays and lesbians to adopt.”

“I can’t answer that directly because I don’t know what the current Georgia law is,” Barnes said. “But to be quite frank with you—I’m not going to lie to you, some things we agree on and some we don’t—I am not willing to pledge or state that I would change the law or enact an affirmative law until I had further time to consider it.”

Baker supported the state’s defense of the anti-gay marriage Amendment 1 in 2004, Poythress hasn’t talked yet about gay issues and Porter voted in favor of the state constitutional amendment banning gay marriage twice in the House. Porter, apparently in an effort to soothe the gays, was scheduled to appear at the Human Rights Campaign dinner last month, but was a no-show.

If Barnes makes it through the primary, he faces a slew of Republicans that take opposing gay issues to a new extreme. Among the bunch is State Insurance Commissioner John Oxendine, who fought Atlanta in its efforts to implement domestic partner benefits, and Secretary of State Karen Handel. She wooed the gays in her successful run for Fulton County Commission, only to later lie her way around it and go so conservative and nasty while doing so that she’s become Georgia’s own Ann Coulter.

Here’s to welcoming Barnes to the race. He’s by far the most politically talented, progressive Dem in the campaign. Let’s just hope that he’s progressed when it comes to LGBT issues to at least support gay adoptions, though it’s probably too much to ask that he understand the importance of marriage equality, too.