Problems with cooling methods and temperatures, plumbing, lighting and a handwashing station were among the factors that led to a failing grade of 66 during a July 9 inspection. A follow-up visit seven days later found some of the same violations, prompting a score of 72. A score below 70 is considered failing.

But the gay-friendly restaurant's owner, Dean Chronopoulos, told Project Q Atlanta on Friday that the violations are being addressed and a yet-to-be scheduled re-inspection will prove it.

“We take full responsibility for it and we've taken corrective actions to fix all of that plus more, actually,” Chronopoulos said. “We are shortly going to ask for a re-inspection. We are not going to keep those scores.” 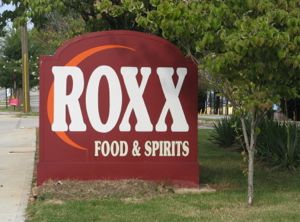 Roxx has notched higher scores on past inspections. In August, the restaurant scored an 81. In 2012, health inspectors scored it 95 in a February follow up to a 78 a week earlier.

Chronopoulos said that he was supposed to have 10 days to correct the issues an inspector cited in the July 9 report. But she visited the restaurant a second time only seven days later, on July 16.

In the July 9 inspection, new violations included a blocked handsink in the kitchen, cigarettes and keys on supplies at the bar, some food items stored in a cooler not cold enough and leaks that allowed water to pool in the kitchen.

In an email to customers asking about the failed inspection, Chronopoulos said he and the restaurant “accept responsibility for our mistakes.”

“I decided to use this opportunity to make bigger and broad changes to better ROXX, since I had electricians, plumbers and HVAC people in the building already,” Chronopoulos wrote. “I did not want a quick fix, but better solutions for the future.”