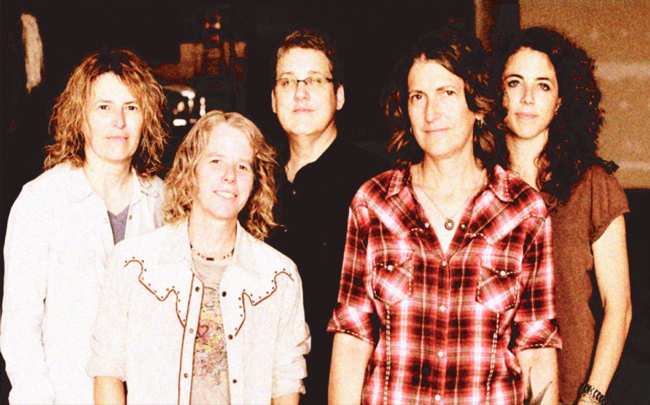 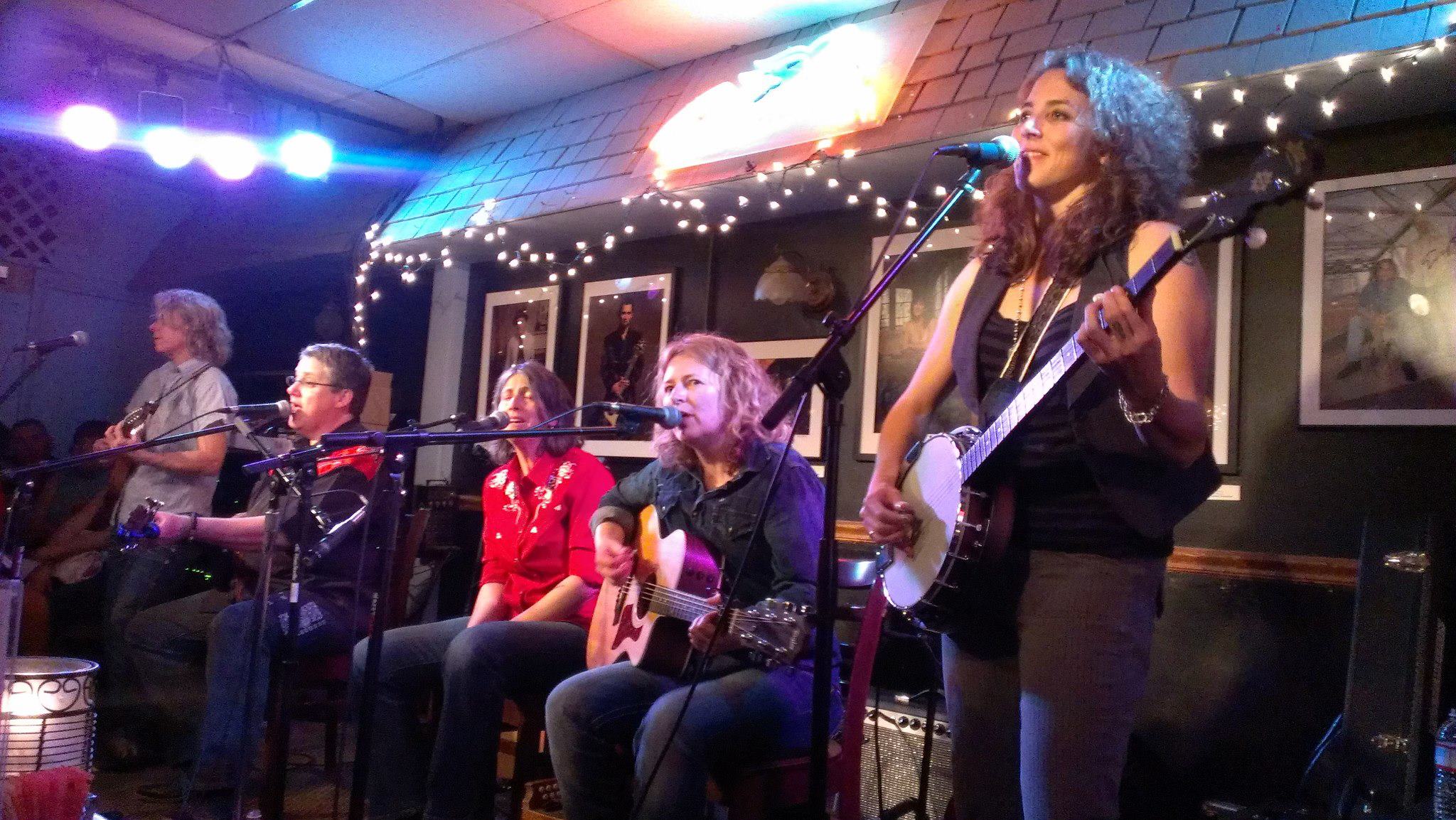 What the ladies behind gay Atlanta-bred, lesbian-loved band Roxie Watson will lose in intimacy, they’ll surely make up in energy when the string quintet makes the move from their oft-played home Eddie’s Attic to the expansive Variety Playhouse stage. 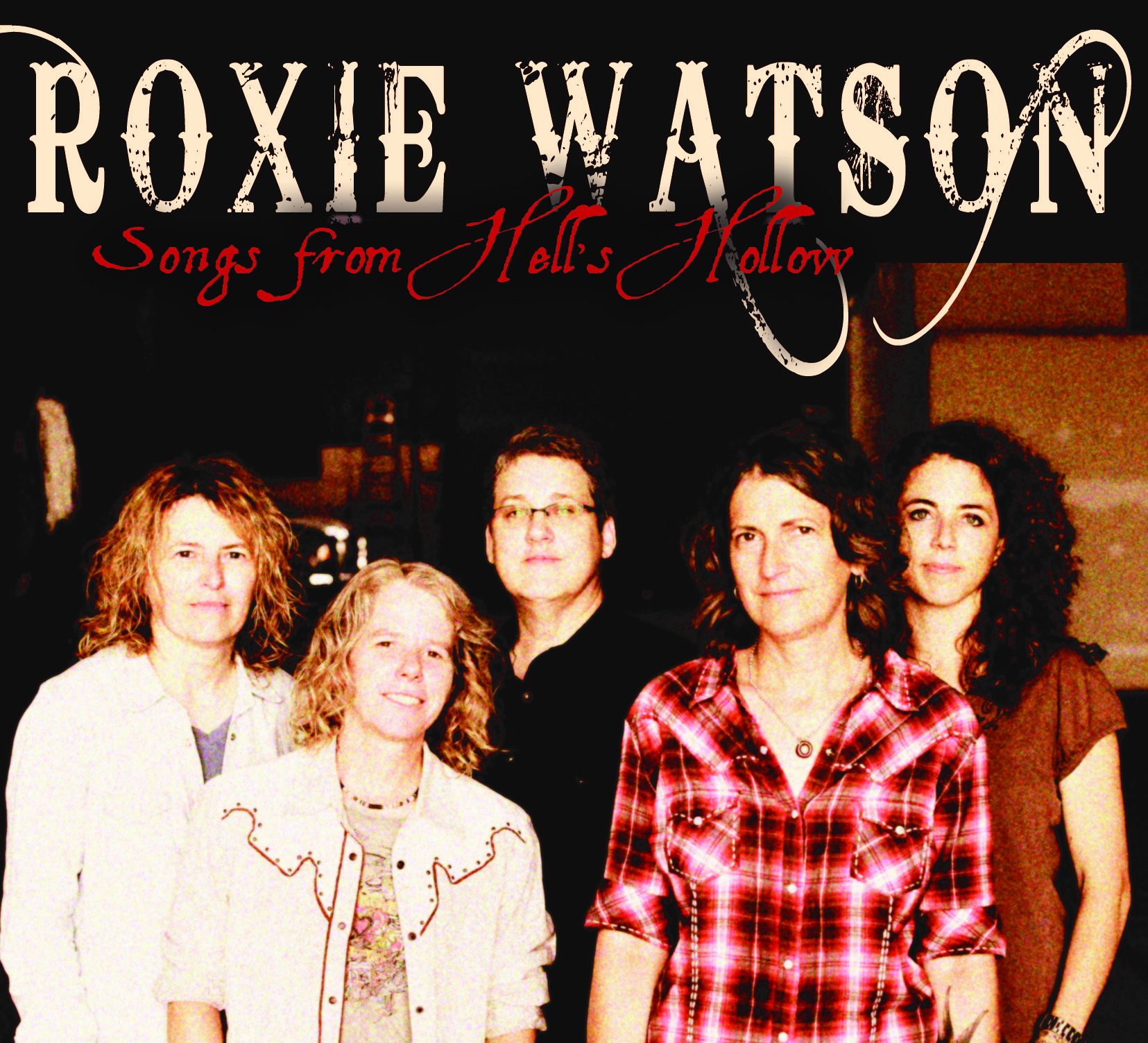 Saturday’s show marks the celebration and release of the alterna-grass band’s third album “Songs from Hell’s Hollow” (second photo). We chatted with the band’s bassist and co-founder Lenny Lasater about the band’s evolution, the touching inspiration behind the darkly titled album and how Dolly Parton helped influence what eventually became Roxie Watson.

The band’s name  is a combination of your and bandmate Beth Wheeler’s grandmothers’ names. Was your grandmother instrumental in your passion for music?
My mother’s mother, Roxie Johnson, was not a musician herself and as far as I know she wasn’t a big music fan but she did listen to music. They had radio—that was it. It was more of a connection I felt with her personally, growing up with her around and what a supportive grandma she was.

So how did you cultivate your musical interests?
For 30-some years, my dad was the church organist at the Second Baptist Church in Union City, Tenn.  Dad also played in tons of combos and dinner bands that would play around. He was also a piano tuner by trade and my brother is also a piano tuner. So we had piano and organ in the house and my mom played the piano very well and sings. So, I just grew up loving music. I played in the high school marching band, played the trumpet, always sang in the choirs—I just always wanted to do music and was always connected with music.

How did Roxie Watson form? Were you brought together by friendships and jam sessions?
Exactly. Beth Wheeler and I who started the band—I was actually friends with her older sister when we went to school in Nashville. We reconnected in Atlanta and for shits and giggles as they say, we started playing different instruments and hanging out.  She put a bass guitar in my hand—she’s an accomplished bassist but was learning to play mandolin. We just started messing around with it and started a little band we called Shitty Red Drum Kit. We were doing one-hit wonders a little bluegrassy.

We just sort of realized we really liked this bluegrass, alt-country stuff. We rejected that kind of music growing up but years later in maturity listening to the energy and passion of bluegrass and of course the harmonies, I realized, ‘Hey, there’s this whole genre of music I’d ignored all these years.’

Dolly Parton had just released “The Grass is Blue” and “Little Sparrow,“ where she went back to her bluegrass roots. She’s a brilliant writer and just hearing that, the amazing musicianship, we were like this is what we want to play. Shitty Red Drum Kit dissolved right away but we kept on playing.

We did our first gig in Birmingham, which was exciting because it was out of town and we were paid like $200. That’s when we decided we needed a band name. We started thinking about our roots and our grandmothers and we came up with Roxie Watson.

We started the band just the two us and then Linda Bolley, who is an amazing session drummer and has toured with Michelle Malone for many years, came on and heard us preparing for this Birmingham gig and wanted to play along with us. So the three of us became Roxie Watson for a while and decided this was the sound we wanted. We knew we had something there.

At the time, Beth Wheeler had a big Ford F-150, and she’s a carpenter so what she did was build a stage on the back of the truck, and we’d put a generator underneath and we would back into people’s yards and play gigs. Sonia Tetlow, who is a local Atlanta music scene legend, her partner was at a birthday party we did in Grant Park and kept calling Sonia telling her she needed to listen to us. She ended up leaving like 20 voicemails holding the phone up listening to the three of us play. Serendipitously, Sonia wanted to learn the banjo so Sonia joined us with the banjo.

And as a matter of fact Becky Shaw, our final member, was at that party that night too. We asked Becky Shaw to join but at the time she had a lot of irons in the fire so she asked us to come back to her in a year.

Roxie Watson just evolved organically now into the five of us over the course of about a year in half from the very beginning.

Explain the band’s dynamics in terms of writing and performing.
We write individually, pretty much writing on our own, but we arrange as a band. That is really what works about Roxie. We do have a real sound and that sound has matured and evolved, but we do have a sound. We may have some specific ideas, the individual writer will come to the table and say ‘I think this sound has a Cajun beat or this one is a bit more bluesy’, but we come together, the five of us, and organically do the arranging. As a group, as we begin to learn the songs, they evolve into their final product.

One of the things we did with our second album, “Of Milestones and Moon Pies,” Becky recorded a lot of our rehearsals and we put it together as an album called “Fly on the Wall.” We did a Kickstarter for the second album so one of the gifts was this album where you could hear the evolution of a song from the first time of, ‘Hey, I’ve got this idea’ and just really rough, into the next round where we add a few more instruments or change it and then into the first time we performed it up until the final product.

For the most part, when you hear a person singing lead on a song, it’s generally a song that they wrote. But Linda and Sonia have written several songs that Becky sings lead on and that goes back to the writer having a vision of the sound—kind of an odd way to say it— but an idea of the sound.

You mentioned your second album used Kickstarter. Was “Songs from Hell’s Hollow” fan-funded as well?
No. This album was funded by CSB/Roxy Music, an independent studio in New Orleans. It came from a connection Sonia made in New Orleans with Carla Bergeron, a woman who owns a small independent label in New Orleans who specifically supports independent women musicians.

The title at least sounds a little darker than your previous albums. Is that so, and where did the inspiration come from?
Definitely this album is not as cheerful as our first two. But the specific title does have a story.  A dear friend of the band, Sarah Auman, who is the unofficial mayor of Blue Ridge, Ga., her partner of 17 years, Linda Pringle, passed last February. They were huge fans of the band.

They have a wonderful home in Blue Ridge and the road they live on is Hell’s Hollow Lane.  They invited us several times and we played several gigs, but we would go up there and take retreats, we would do songwriter retreats at their home. They have this huge screened porch looking out over the mountains and we would sit up there and write and work on music.

So a lot of the music, a lot of the songs on this album had their genesis on the porch there on Hell’s Hollow. After Linda’s passing, we felt such a loss. Sarah having been such an amazing supporter of us all these years, we knew we wanted to make a tribute to Sarah and Linda so we titled it “Songs from Hell’s Hollow.”

Why Variety Playhouse and what can fans, new or old, expect from the CD release party?
The CD release party is going to be a real celebration. It will be Roxie Watson’s first time performing on that stage—what a venue!

We had our first two CD release parties at Eddie’s Attic but it’s a small room and we decided to move to Variety Playhouse so that we could get everyone in with one show and plus the stairs at Eddie’s Attic have created some accessibility issues.

We’ll have Jamie Lynn Vessels, who is a beautiful young songwriter from New Orleans, opening for us. And we’re very pleased to have her.

I hope it is going to feel the same way because I love the intimacy of Eddie’s but having all our family and friends there with us on one night to celebrate this is going to be amazing.

What’s next for you and Roxie Watson—will the music ever be a full-time gig?
(laughs). Well, there are five of us and we are all full-grown. We’re all mortgages, jobs and families. Roxie isn’t full-time, and I think we’ve reached a really amazing level of success and following with what we do locally and regionally. We have not made that leap of faith and it would be a leap of faith for five 40-somethings and a couple 50-somethings to do that.

For the most part Roxie Watson is about having fun and sharing the music and we’ve been able to do that with great regularity. I’d like to say if there is a greater plan, it has yet to be revealed. Right now, we are quite content to share our music like we’re doing . . . and we’re having so much fun doing it! But who knows, if “Songs from Hell’s Hollow” takes off, who can say?

Roxie Watson's CD Release Party for “Songs from Hell’s Hollow” takes place at Variety Playhouse on Saturday, March 15. Buy tickets, visit the band's website, and like them on Facebook.