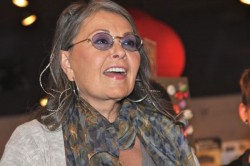 Barr, wearing a single red and black glove on her left hand, appeared at Outwrite Bookstore on Wednesday to answer questions, and read from and autograph copies of “Roseannearchy,” which was released earlier this month and is her third book.

“I want them to give women back hemp because as soon as they took hemp out of women’s hands, this world went to shit,” Barr said. “[Marijuana] is good for women rather than these drugs that these pharmaceuticals are giving that eat out your liver and destroy your brain cells so that you become very right wing.” 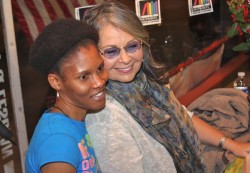 Barr’s brother and sister are gay, a fact that she said pushed her to supporting same-sex marriage and other LGBT issues.

“I did it because I have a gay brother and lesbian sister who I always saw what happened to them growing up in Salt Lake City, Utah. My brother had his nose broken nine times by the time he was nine years old. He always said it was other reasons but we knew what it was. It was wrong and it really pissed me off,” she said.

Barr also hinted that a “Roseanne” reunion is a possibility. The show ran from 1988 to 1997 and popularized Barr’s creation of the phrase “domestic goddess” that refers to the working-class housewife she portrayed on the ABC series.