Atlanta Gay Men’s Chorus is on a roll this year, and it looks like they have another hit in the making with the July concert series “All You Need Is Love,” a tribute to the 50th Anniversary of the Fab Four opening Friday. 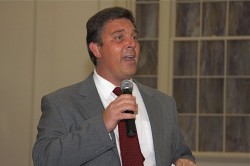 For the Friday and Saturday concerts at the Rialto, the chorus works from the Lennon-McCartney songbook to combine the Beatles’ original arrangements with the high-energy style of the 100-voice AGMC. The kinetic energy of special guests StaibDance help salute the cultural impact of the iconic ‘60s band.

The shows also feature ’60s-style costumes and a number of pertinent sound bytes from the era, including that of Dr. Martin Luther King, Jr. and President John F. Kennedy.

On the heels of a well-received “Georgia On Our Minds” tour across the state that culminated in Atlanta with a performance honoring Cochran, Ga., prom pioneer Derrick Martin, the Beatles tribute continues AGMC’s tide of show stoppers.

“Of all of the concerts in our recent history, this one has all of the elements of being a huge crowd pleaser,” Fenton says. “If someone has never experienced an Atlanta Gay Men’s Chorus concert, this is the one to go to see.”

A Beatles tribute may not necessarily be the first choice that comes to mind when you think of the chorus, but the revolutionary times of the 1960s with powerful pushes for social change continue to resonate, says Kevin Robison, AGMC artistic director, in a prepared statement.

“How can we not? It’s all-male vocal music, with simple yet powerful messages of civil rights, love, peace and understanding—tolerance in an intolerant world,” he says. “The messages are needed just as much today as in the tumultuous ’60s.”

There are few entertainers like the Beatles that hearken the word “iconic” with such ease. With their “Please Please Me” album still ranking among the top 50 of all time and their number of No. 1 songs up there with pop and rock’s most elite, the catalog of choices for the chorus seemed never-ending. 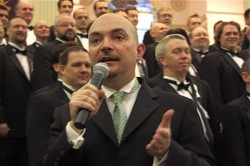 “We had only one challenge in building this musical tribute, and it was a big one — what do we possibly leave out?” adds Robison (bottom photo). “We’ve worked hard to include as many of our favorites as possible. We have nearly 30 of them in the show—probably an AGMC record.”

Certain songs are “arranged specifically to bring the power of their messages into this century,” Robinson continues. “Our goal has been to create a work that honors and celebrates the 60’s, but also emphasizes that we have more work to do as a community with regard to civil rights and equality.”

Here’s a cute little video that the chorus put together to pique your interest in the show:

A version of this preview originally appeared on June 25.