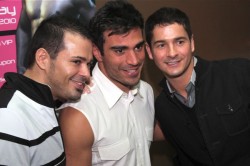 VIEW PHOTOS | Rodiney Santiago Appearance @ Mixx There was none of the fabricated drama that’s a staple of Logo’s “A-List” when Rodiney Santiago hit Atlanta on Saturday. The Brazilian model and now well-known other half of Reichen Lehmkuhl during the show’s recently-wrapped first season popped into Atlanta to pitch his sizzling new calendar. Yes, during a season of “A-List” drama that seemed to focus on Santiago’s lack of work, he’s nailed it with his 2011 calendar packed with photos from Carlos Arias. 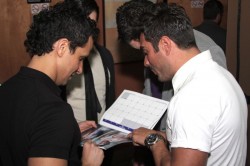 Santiago, who’s represented in Atlanta by Caliber Enterprises, had plenty of the calendars on hand to dish out to adoring fans during his stop at Mixx. He even signed a few Mixx shirts. We’ve been waiting for Santiago to come to town, a notion that certainly was fed by his recent appearance in the Morning Fix. His manfriend Lehmkuhl was here in October to promote the show. Among a cast of “A-List” regulars that leave a bad taste in your mouth, Santiago is really one of the show’s few redeeming qualities. Get a sneak peek at the calendar in the video below.