Roddy White to the gays: No respect for you 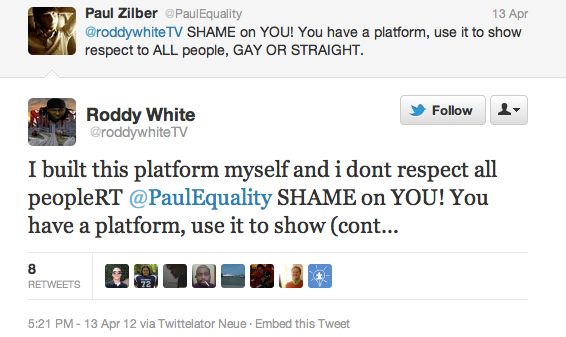 Atlanta Falcons wide receiver and not-so-smart tweeter Roddy White has one thing to say to you panties-wearing gays: I don’t respect you.

White tweeted himself into trouble last week when he responded to a question about whether he’d rather lead the NFL in receiving stats or win a Super Bowl with this: “Would u rather be gay or straight come on u know that answer.”

Not quite done with implying that gay is bad, White followed up by crying “freedom of speech” and then this: “Everytime someone says the word gay u want to get your panties in a bunch relax #whyusoemotional”.

So for White, the gays are emotional, panty-wearing whiners who make bad choices.

When called out for his off-the-field offense, we got an apology of sorts from White, which was better than the dead silence from the Falcons: “OK people I apologize for saying the word gay I know it’s a sensitive subject and a athlete of my stature should not use it.”

But the Twitter-verse wasn’t quite done with White. A day after the initial apology on April 12, White was confronted by another follower who made this most logical point: “SHAME on YOU! You have a platform, use it to show respect to ALL people, GAY OR STRAIGHT.”

White’s response? A priceless example that the pro jock has learned nothing from this Twitter flap: “I built this platform myself and i dont respect all people.”

What, we don’t even get “love the sinner, hate the sin?”