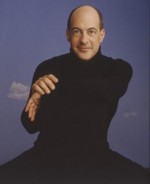 Robert Spano, the openly closeted conductor of the Atlanta Symphony, opined about the orchestra he leads, the impact of the recession on the arts organization and the upcoming season in a new interview.

With the ASO announcing its 2009-2010 season and its 65th year, we sat down to talk with conductor Robert Spano. Always an intense, high-wire musician, Spano has mellowed in his eight years as music director. He arrived as an agent of change, with a penchant for contemporary scores and intriguing thematic programming.

By necessity, he’s become leader of the establishment. He speaks more diplomatically than ever. He’s even starting to look like an old Viennese maestro, sporting a dark moustache and silvery goatee. (“How’s it look?” he asks a visitor to his studio, in the basement of the Woodruff Arts Center. “I’m not sure about facial hair; I haven’t had any since high school!”)

Spano’s openly closeted moniker comes from his back-and-forth with Southern Voice in early 2002 when he spoke to the Atlanta Executive Network, a gay business networking group. Spano refused at the time to confirm speculation that he’s gay.

ASO Music Director Robert Spano addressed the Atlanta Executive Network, a gay business group, in March 2002 in the midst of speculation about his sexual orientation.