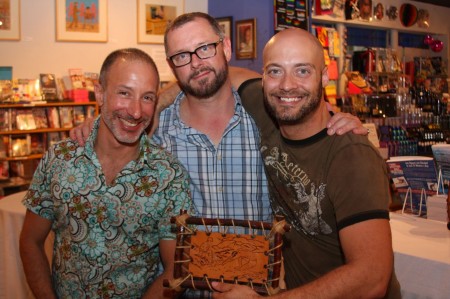 Artist Robert Sherer (center) with Philip Rafshoon, owner of Outwrite, and Joey Mills, who purchased a piece of Sherer’s work during an event Friday.

Robert Sherer, the Atlanta artist well known for his past use of HIV-positive blood in his work, opened a new exhibit on Friday to raise funds for a scholarship he established for gay students.

The exhibition at Outwrite Bookstore & Coffeehouse, “Puppy Love,” features work from Sherer’s “American Pyrographs” and runs through August. Proceeds from the sale of works benefit the Robert Sherer GLBT Scholarship Endowment at Kennesaw State University, where Sherer is an associate professor of art.

The exhibition is the first chance for Atlanta buyers to purchase Sherer’s pyrogarphs, which have been sold exclusively at a gallery in Massachusetts. The series took shape after Sherer found his old Boy Scout woodburning tool, a discovery that brought back a flood of memories from his childhood. He used the tool to create scenes from his childhood spent camping, scouting and playing sports.

“The secret rites of passage and relationship intrigues played out in the locker rooms, pup tents, and tree houses helped to define me as a man,” Sherer says in promotional materials for the show.

The scholarship endowment was created in January 2008 to benefit gay, lesbian, bisexual and transgendered art students at KSU. Sherer is funding the scholarship primarily through sales of his artwork and has pledged more than 20 pieces from three series of work — “American Pyrographs,” his neoclassical work and his “Blood Works: Portraits of Love and Loss in the Age of AIDS.”