Rise up for free Atlanta-branded condoms 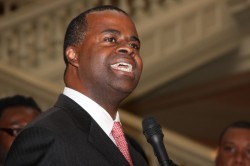 With Mayor-elect Kasim Reed (photo) busily preparing his takeover of City Hall, we’ve got a suggestion for him to get people excited again about Atlanta: Official (and free) condoms branded with the city’s name.

New York does it. In fact, that city to the north is sponsoring a contest for the design of the wrapper of its next official condom. It seems New Yorkers unroll more than 40 million of the free condoms each year.

The Health Department is inviting creative New Yorkers to give the NYC Condom a new look. The city-branded condom will retain its classic image, but the winning design will grace a special limited-edition package that debuts next fall. Any New Yorker at least 17 years old can submit an entry between now and January 22. During February, the Heath Department will unveil a small group of finalists – designs that capture the city’s distinctive culture while promoting safer sex. New Yorkers will then choose a final winner through an online popular vote. Besides appearing on several hundred thousand condom wrappers, the winning design may be featured in future condom promotions.

“The NYC Condom has helped New Yorkers talk about and practice safer sex,” said Dr. Thomas Farley, New York City Health Commissioner. “We now give away more than 40 million condoms a year – up from 3 million in 2002. We want to keep people excited about the brand, because we know that condoms protect health. Used correctly and consistently, they prevent HIV, sexually transmitted infections and unintended pregnancy. This is every New Yorker’s chance to help convey that message.”

Now that’s a way to keep people excited about safe sex. And Atlanta could use a boost when it comes to safe sex — Fulton County has the highest prevalence of HIV among metro Atlanta counties.

With the city’s electorate still smarting after a divisive election — Reed won by little more than 700 votes — what better way to bring folks, gay and straight, together than with free condoms. No, not together in that way. You know what we mean. Handing out ATL-branded condoms would help soften Reed’s image, too, as he sometimes comes across as a bit stiff. No, not in that way.