READ MORE | McPhaul responds with race card, legal threats Before Terence McPhaul became embroiled in controversy at the helm of a crumbling YouthPride in Atlanta, he was an author, globe-trotting therapist to the stars, chemist, TV network founder and all around braggart. No, really. His recent contentious appearances -- and continued efforts to pull a Snuggie over your eyes -- as YouthPride executive director pale in comparison to the trip down the rabbit hole that is Terence McPhaul, “mental health therapist for celebrities” and founder of “revenue behemoth” Psychology Television Network. In a video posted to YouTube in December 2006, McPhaul – dressed in a black tuxedo – addresses a smallish, informal crowd as the founder of Psychology Television Network and author of at least two books.

Psychology Television Network, Inc. operating under the trade name PsychTV, is the latest cable network venture looking to become a revenue … behemoth. Created in the "narrowcasting" tradition, similar to MTV, HGTV, Lifetime, Oxygen and ESPN, PsychTV's programming will be totally psychologically based. The brainchild of Terence McPhaul, author of "The Psychology of Hip Hop", "The Celebrity Psyche", and Mental Health Therapist to the stars, PsychTV is yet another trailblazing endeavor. 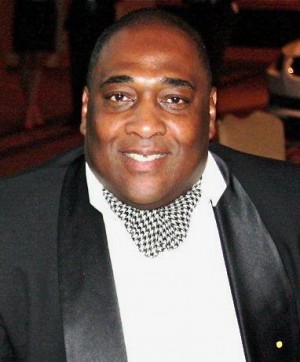 The hits roll early in the video and McPhaul spends nine minutes describing himself as an author, therapist, chemist and public relations expert who is so well-versed in handling the media that celebs seek out his assistance. It’s a media savvy that has left him of late as he combats charges of mismanagement at YouthPride. There’s this:

“I am a mental health therapist for celebrities, exclusively. Specifically what I do is, McPhaul Consultants & Personal Advisers is a firm that has offices around the world –- Atlanta, Beverly Hills, New York, Nice, Zurich, Dubai and Kuala Lumpur as well as Sydney. Sydney was my latest that opened.”

And those oil spills!

“Now how it started. I actually am a chemist as well. I worked as a hazardous materials chemist for several years and my specialty, of course, was poisons and explosives. If there was an oil spill or a fire or something like that, I was running to the call. It was so exciting being in the midst of all of that danger.”

“Since people knew that I had corporate PR experience, what they wanted me to do was get them out of trouble. You know how to handle the media, you know how to talk to these people.”

Except, you don’t handle the media like this. But wait, he’s an author, too! There’s his 188-page “The Celebrity Psyche: A Psychological view of life in the land of Cinema, Money, Music, Sex and Power.” Published in 2003, the book is pitched as a study in how entertainers and athletes become victims of luxury and excess. You can pick up one of two remaining copies from Amazon for $198. Or go for a cheaper option: a used version for $16. Celebrity seduction!

Celebrity Life and Hollywood magic. It’s what seduces us to lose ourselves in movies and music videos. Celebrity Mental Health Therapist Terence McPhaul reveals how those in the public eye can become victims of supreme luxury and excess. Media is quick to make assessments regarding celebrity behavior, and often these sources are well off target when it comes to the "real reason" stars act as they do. Sean "P. Daddy" Combs, Oprah Winfrey, Halle Berry, Martha Stewart, Jennifer Lopez, Michael Jackson, Bill Gates and John F. Kennedy, Jr. are just a few of the personalities surveyed in this enlightening piece of work. 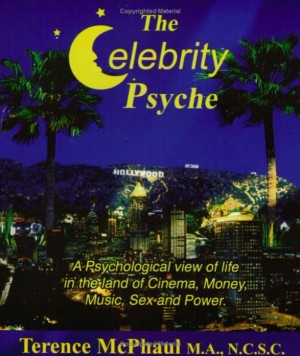 Better yet is the Amazon description of “Red Carpet” regular McPhaul, his four other books and global domination of life coaching and therapy.

Terence McPhaul is the founder and director of McPhaul Consultants and Personal Advisors, the only agency in the world providing counseling, therapy, life coaching and personal advisor services exclusively for celebrities. As the Director of McPhaul Consultants and Personal Advisors, McPhaul has been helpful in assisting celebrities from corporate, sports, entertainment and social communities set priorities, reach goals, and adjust to the demands of celebrity-while addressing underlying emotional devices such as Depression, Anxiety, Chemical Dependence, Grief and Loss, Relationship Concerns and a variety of other issues. In addition to "The Celebrity Psyche" McPhaul is the author of four other titles that include "LAW: Liars and Weasels", "No White Lady I Don’t Want Your Purse: An Examination into the Psychological Undercurrents that Plague White Women", "The Psychology of Hip Hop" and "The Exploitation of B2K". Terence McPhaul is a Red Carpet regular, whose annual schedule includes attendance of the Grammy® Awards and The Academy® Awards. He has been utilized as a consultant for cinema, particularly by those seeking appropriate direction on projects with regard to psychological implications. McPhaul is regularly sought by program directors of TV talk shows and national media as an expert in the field of Mental Health to deliver perspective or respond to programming regarding social and behavioral issues. McPhaul has appeared as a Mental Health expert for Court TV, and Bill O’Reilly’s The O’Reilly Factor for FOX News.

How about that television network? Only McPhaul’s braggadocio does it justice.

Psychology Television Network, Inc. operating under the trade name PsychTV, is the latest cable network venture looking to become a revenue behemoth. Created in the “narrowcasting” tradition, similar to MTV, HGTV, Lifetime, Oxygen and ESPN, PsychTV’s programming will be totally psychologically based. The brainchild of Terence McPhaul, author of “The Psychology of Hip Hop”, “The Celebrity Psyche”, and Mental Health Therapist to the stars, PsychTV is yet another trailblazing endeavor. PsychTV has developed its roster like any other major network with original programming. The network’s unique approach combines quality educational programs that will be equally entertaining. Viewers will be entertained while they receive information, making learning on various social and psychological subjects much easier. Shows such as “Sessions with Terence McPhaul”, where superstars sit down one-on-one with McPhaul to have a heart to heart conversation, enable the viewer to get the truest look into their favorite star’s personality. Shows like Sessions are the cornerstone to the puzzle that PsychTV banks on to make the network a success. PsychTV has a unique formula that includes staying on top of the latest trends, seizing the opportunity to inform the public how trends influence everyday behavior. For example with the weekly program “Psychology of Hip Hop”, based on the book by PsychTV’s enviable Chairman, highly controversial issues will be discussed. Remaining true to its word, PsychTV’s programming is competitive with other stations, and rebuffs the idea that learning must be boring. The network’s programs include; a music video program, sports news, a reality show, a series about relationships, parenting, a celebrity news program comparable to Entertainment Tonight, Saturday morning programming for kids, and much more. McPhaul believes this market is just beginning to blossom, stating that “the self-help genre is a multi-billion dollar business, and all of this is based around psychology, helping everyone understand why we behave the way that we do.” “The programming at PsychTV is an entertaining way to unmask some of the important questions about human behavior, without using shortcuts that leave out the most important ingredients – truth and integrity,” adds McPhaul.