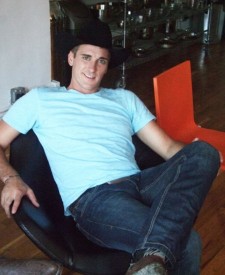 Pull yourself up by the bootstraps. It’s time for Atlanta Cotillion, the gay gentlemen who dress as ladies once a year for AID Atlanta, to build toward their annual ball. For 2012, they ride into the fundraising season cowboy style. Saturday’s Good Cotillion Belles party at Urban Body Studios sends up ABC’s campy hit “GCB” with a dress code of “GCB Chic.” Think cowboy hats, jeans, chaps and spurs, then add your own flair for the “chic” part. “Awesome raffle prizes, amazing food, adult beverages, and hot guys in cowboy hats and tight jeans,” says Ronnie Mallette, chair of Cotillion 2012. Want more? You got it. Besides the cowboy butts that drive you nuts, the big draw for the GCB party that gives the theme true authenticity is special guest Levi Crocker (photo), one of the hot stars of Logo’s big gay reality franchise “The A-List: Dallas.” The real-life gay rodeo rider brings sex appeal to Atlanta’s urban cowboys just for the event. “[Crocker] is one handsome man and very sweet – just what I love in a Southern man,” Mallette says. “I'm super excited and can't wait for Atlanta to meet him at our kick off fundraiser.” Saturday’s GCB hoedown will also introduce this year’s class of male Cotillion debutantes, who make their Southern-style “debut” in full drag at September’s annual Cotillion Ball. With fun fundraising events and online donations throughout the summer, the individual deb who raises the most money for AID Atlanta will be crowned Cotillion Queen. Check out 2011 Cotillion Ball pics. But as the Cotillion Crew reminds us each year, “It’s not about the dress… It’s why you wear it,” driving home that this is all about raising big bucks for a worthy cause. Since its inception, Cotillion has raised $1.16 million for AID Atlanta. The 2011 season broke the record for a single year with $171, 026 deb dollars. Saddle up and get your tickets online now. It’s Cotillion season y’all. Yee-haw!