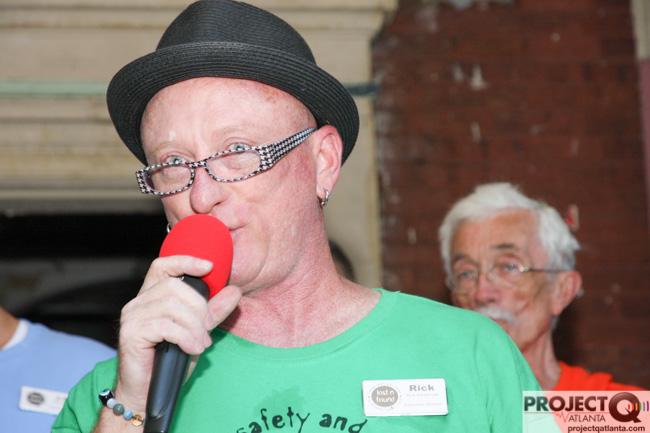 “Sometimes you have to let your child go when you have done all you can for them,” Jeffrey said in his post. “Hopefully the board and staff will continue to drive the mission and support our youth that have no voice. As we have already quickly seen, many other wonderful opportunities lie ahead for Rick and those passionate about their mission. Onward and upward to bigger and better!”

“Over the last year and a half, the organization has grown so much, expanded so rapidly that some stressors occurred, stressors that may have been liveable prior, but don’t become workable as an agency gets bigger,” Ross said.

Ross also claimed that the organizational shakeup in 2016 did not have anything to do with this move.

“It’s just a natural outcome of [Lost N Found’s growth] and nobody here has any animosity,” he told Georgia Voice. “It’s a clean break, which is best. That doesn’t mean we won’t welcome him back in the future, but for right now, separation is necessary.”

Ross said the board has started the search for a new executive director.

Westbrook was demoted to outreach director in August 2016 as the board created two new positions — operations director and programs director — to help lead the organization. Longtime Lost N Found advocates and supporters blasted the move on social media and praised Westbrook’s leadership. A rash of board resignations followed. Westbrook was reinstated days later following a board vote in a public meeting at the organization’s Chantilly Drive headquarters.

The following month, Lost N Found dropped plans to renovate an aging Midtown building into a LGBTQ homeless youth shelter as the landlord looked to turn the property over to a developer. Westbrook told Project Q Atlanta in March 2017 that the organization was working with a local church to secure a facility in Midtown that would serve as the group’s new home for its drop-in center. They opened the new facility that summer.

Project Q Atlanta has reached out to Westbrook, Ross and several board members and will update the story if they respond.

UPDATE | Rick Westbrook issued the following statement to Project Q Atlanta about the details behind his resignation.

Lost n Found was started to meet a need that was not being met. Six-and-a-half years ago, myself, Art Izzard and Paul Swicord came together and we made a promise to the community. If you support us, we will do everything possible to make a difference for the homeless LGBTQ youth.

We started that night and never stopped. We had no idea the magnitude of the problem, and each year it grew and so did our organization with new deliverables to support. Lost n Found was a success from the start because the community got behind it and stayed there.

I am just a simple gay man with a lot of friends and even more over the past years that stepped up when asked. There have been a lot incredibly happy accomplishments as well as tragically sad points over that time and I would do it all over again, knowing that I always have my community to back me up.

When things got bad our community ALWAYS stepped up. I never had to worry about paying the bills because ALL of you made it happen.

Last night I tendered my resignation, not because the problem is over — far from it. The Board and I simply did not agree on the way to move forward — plain and simple. Financially, I left them in good shape and they promised to continue staying true to the mission.

This does not mean I am done helping our homeless youth, it simply means that I will lend my talents and expertise in other ways or in a different position. I’m going to spend some much needed rest with my incredible partner (soon to be husband) and extended family. Then it will be time to step it up even more because the problem is growing at a rate that really is not even measurable. I will keep you posted on where I land and how you can help. I know you will as you have always done.

To our kids out there — lease know that you ARE loved, have value, are incredible just as you are, and you are meant to be on this earth living your true authentic life.