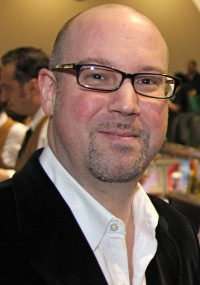 Chalk one up for gay former AJC scribe Richard Eldredge, one of the city’s many out of work journalists but one of the few who’s landed on his feet by scoring a new gig that’s probably better than the last one.

Eldredge was for 16 years the man behind the buzz — Peach Buzz, that is — at the AJC, combining a thick Rolodex with his reporter creds to deliver a daily dose of local celebrity dish. But he waved off the AJC’s offer earlier this year of swapping his Peach Buzz duties for a more traditional reporting role. We’re still not sure why the newsdaily decided to fix something that wasn’t broken, but they did and Eldredge left in October.

Since his departure, the paper turned Peach Buzz into a daily recital of celeb birthdays while giving the beat to former society columnist Jennifer Brett in a new column titled The Buzz. It lacks pizazz and the punch it had with Eldredge, but then we’re a bit biased. Eldredge is a friend and colleague of Project Q’s publishers and his steady diet of Elton John news always kept us coming back again and again to Peach Buzz.

Between leaving the AJC and inking his new deal with Atlanta magazine this week, Eldredge has mingled with the gays at the Toy Party earlier this month and even penned an interview with gay soap star Thom Bierdz for us.

Creative Loafing has the details on Eldredge’s new gig:

Eldredge fans will be happy to hear that the Atlanta Magazine gig will be “shockingly reminiscent” of his Peach Buzz work — “fortunately or unfortunately for readers,” Eldredge tells CL.