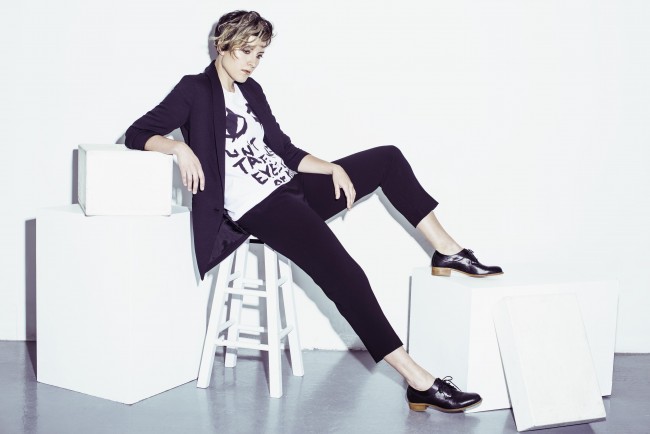 January can be a vast, wintry wasteland when it comes to new music. Since so few artists release albums in the month, it can be an ideal time to look back and see if there are gems you might have missed in the previous year. Lo, and behold, Ria Mae’s My Love.

With this collection of pop songs about heartbreak, recovery, and love, the singer/songwriter delivers heartfelt lyrics on the seven track set. Standouts include “Broken,” a duet with Tegan Quin of Tegan & Sara; “Bend,” an anthem to resilience; and a glittering remix of “Bend” by Thomas Gold that’s ready for spring dances.

Out and proud, Mae is mostly known in her Canadian homeland, but she’s ready to make her way south of the 49th parallel. Along with her excellent EP, her sparkling personality offers a welcome break from our cold temperatures, and it was fun to hear how she makes winter work for her.

Songwriting can be so personal. What’s it like to have your deepest thoughts out there in the world?

It’s a little scary. Once they’re out, I don’t think about it. In the weeks leading up to releasing something, I have a lot of anxiety, but I try to remind myself that I’m just a little ant on the planet.

How do you come out of your shell to perform?

When I was younger, I did a lot of daydreaming. I’d sit and listen to music and pretend I was someone else. I was shy and awkward. I would walk down the street and not know where to put my arms when I walk. But when I write and perform, I become really confident. Before a show, I am shy and awkward, but then I walk out on stage and I am confident. I get to feel what it’s like to be confident and assured while I perform, but when the show is over and I walk offstage, I am shy and awkward again. [Laughs.]

So is it like Beyonce having her Sasha Fierce alter ago when she performs ,or do you think it’s just another part of your personality showing itself?

Maybe everyone has that to a degree. For some people, it’s when they go out and have a few drinks. “Now I’m nighttime Ria.” It’s when you feel really good about yourself. For me, it’s when I perform. It’s like it’s an avatar of myself.

So what’s been the reaction to My Love?

On My Love, “I’m on Fire” may especially strike a chord in queer listeners. How do you think your identity informs your creative process?

I’m from Halifax, a small city of 300,000 people. I think being from there and being a queer person, I think it made me able to relate to a lot of people who are from small towns and don’t fit in. I also grew up listening to a lot of hip hop music and I love that idea of “I can do it, I can make it, I can beat the odds” that shows up so much in hip hop music. I don’t know why, but I equate hip hop music with queerness, which is ironic because some of the lyrics can be problematic, but hip hop always makes me think overcoming things and being queer.

There’s a line in the song when I talk about being with my queer friends in the gay bar and then going across town and being with my straight friends and they don’t even know where the gay bars are located. I think there’s something everyone can relate to when you’re queer, living two separate lives for a while.

Do you think you might come down south and see us on a tour someday?

I’ve done a few smaller tours in the States, mainly in the northeast, but I love the States. I love the weather in the South. It’s lovely! I think every musician wants to be in the States more. I started my career in northeastern Canada and moved on to the rest of Canada and look forward to taking my music to other places.

What’s it like to have dreams of being a recording artist, then seeing your dreams come true?

I’ve had a lot of down time the last few weeks and I’ve bene able to reflect on things. My family is in the restaurant business, and it’s like opening a restaurant and having no one come and eat, but then slowly people start coming in, and then more people come, and the word spreads.

In Canada, we’re working on a couple of singles from the EP. We’re pushing “Broken” with Tegan Quin, and it’s doing quite well on the Canadian charts… We also have a new video for “Red Light” that’s just been released, so that was fun as well.

Find out more at riamae.com.