Revisiting a fake Atlanta and its web of cis white lies 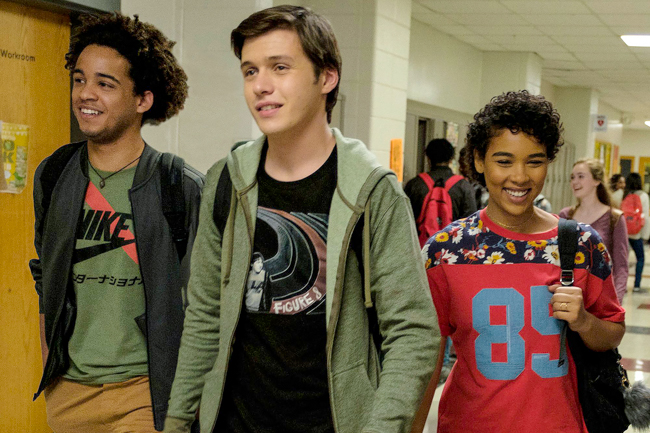 Maybe it is generational. Maybe coming of age in the late ‘80s and ‘90s as a queer person has shaped my view of the world.  Jaded it.

Recently I re-watched Love, Simon, a movie I couldn’t wait to be over upon first viewing. I’m all for gay love stories, but the saccharine world of the movie, shot and set in Atlanta, felt like it had no stakes, that a happy ending was almost assured from the moment heteronormative Simon started his first lengthy exposition.

Sure, there are twists and turns in the plot — Spoiler alert: Simon is gay and hasn’t told anyone yet — but they feel like the twists and turns of the kiddie coaster you put a three-year-old on at a state fair, not the sudden and often jarring highs and lows that being queer can conjure in our real daily lives.

In the queer movies of my youth, if a queer character coughed in Act I, they had full blown AIDS by Act II.  Or if the queer character met someone and fell in love in Act I, one or both of them would be attacked and or die by Act II.  Those movies served a purpose and reflected the struggles of the day, but often did not inspire much in the way of hope for a brighter future. Try watching The Boys In The Band and not wince at the double helping of self-loathing it serves.

Of course, the dangers and travails of the not-so-distant past are not the worries of queers of today, but the low-stakes world of Love, Simon goes too far. It rings false, and instead of being swept away in the sweet little love story it is meant to be, I sat there waiting for the other shoe to drop, for his secret lover to be baiting him into being bashed or even worse.

Sure, he is blackmailed into helping a straight douchebag hook up with a friend of his, and when he finally comes out, the straight people in his life are upset at his deceptions, but it all wraps up too nicely. We are left in Simon’s moment of completion. It’s as if the conventionally attractive, masculine acting and appearing, white cis male protagonist will never encounter another problem again.

The most realistic part of Love, Simon is the depiction of the relationship Simon has with the only other out gay person at his school, a fabulous person of color, Ethan.  Simon wants to avoid and ignore Ethan, who he fears will sense or notice he is gay, and because he’s ashamed that Ethan is visibly and unashamedly gay.

When Ethan is finally utilized as more than the measure for what is acceptably gay, he has to pause his own struggles as the only out gay character in the entire movie to help and support Simon with his struggle. There is an analogy here about how attractiveness, whiteness, masculinity and cis-ness are prioritized in our community, how anyone who is not one or all of those things is marginalized.

I found myself yelling to no one, “Ethan is the main character of this damn movie! Where is his story?!”

Love, Simon is a product of our times, the way the queer films of my youth focused on our struggles and sacrifices and left little room for happy endings. The queer depictions today feel like an over-correction of the past. Now we have queer characters experiencing little or no resistance, that it is accepted and not part of the character’s core struggle.

But reality is more complicated than that.  We can live amazing lives and be visible in ways that were unheard of even 20 years ago, but we are always faced with homophobia in our daily lives. No matter who you are, you never stop being a person of color or being queer in the eyes of bigots. Attacks on queer people are still attacks on our visibility.

Perhaps we will get to the world of Love, Simon for all queer people, not just the masc, white, cis male ones. In the meantime, the real heroes of the stories are the Ethans of the movies and in life, who are out, loud and proud and deal with everyday problems and systemic homophobia with grace.

Ian Aber is a queer columnist, comedian and showrunner living in Atlanta.

This column originally ran in Q magazine. Read the latest issue below for even more.